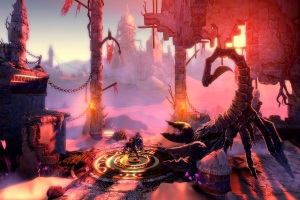 Trine 2: Complete Story is heading to Sony’s next-gen console at or around launch, the game’s Finnish developer Frozenbyte has announced on PS Blog.

Trine 2: Complete Story is the latest edition of the game which includes the original full length title alongside it’s DLC Goblin Menace and secret level Dwarven Caverns. This will amount to a total of 20 levels for players to experience. As expected, the PS4 will allow Frozenbyte, who’s self-publishing the game, to utilize the system’s superior graphical power; Trine 2 will run on native 1080p resolution with full 60 FPS. The game will also include stereoscopic 3D.

“With 3D displays becoming more common every day, we’ve made sure Trine 2: Complete Story is a treat to play in 3D as well, the studio stated.”

Trine 2: Complete Story follows the recent announcement of four indie titles also making their way onto the PS4. Thatgamecompany’s flOw and Flower, with the latter running on full 1080p resolution with 60 FPS will make their debut around the PS4’s launch. Queasy Games’ Sound Shapes and Fun Bits Interactive’s Escape Plan will also join the party.