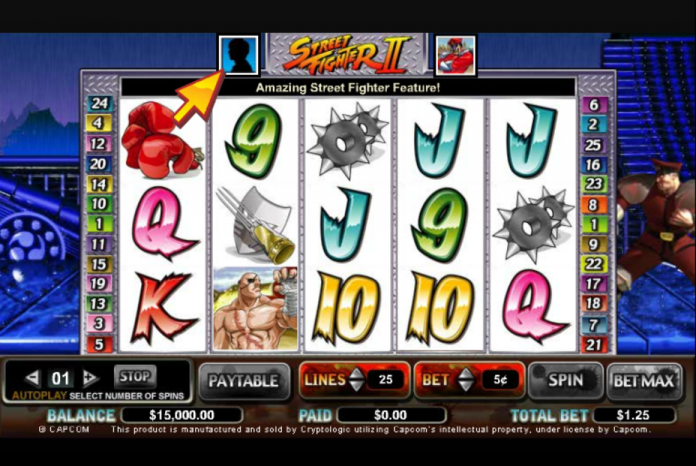 We’ve done a series of articles on online casinos and online gambling, including articles on particular popular games, and even one on Weird Casino Games. It is known that the online slots providers and developers learn a lot from the conventional video game industry, in fact, most video game trends sooner or later become a trait of slots as well. For instance, slot games used to be two-dimensional, whereas contemporary slots are 3D and a lot more modern looking.

There are plenty of slots where developers have been inspired by conventional games, but decided to take things in a different direction. However, here we’ll focus on the slots that are entirely based on video games, feature the same titles and use imagery and insignia from the original games. If you like to check out a wider range of online slots, including ones inspired by video games, as well as slots based on films and books, browse SlotsWise and its online slots selection.

One of the most iconic games, especially for those who grew up in the 1990s. There were many versions and sequels of this classic fight game, and even a couple of films based on it. If you find the adventures of Ken, Ryu, Guile and Chun-Li exciting and you’re a fan of online slots as well, then you will definitely like this online slot.

As the name indicates this slot is based on the second Street Fighter, a game that was released in 1991 and the next year it was ported to Super Nintendo. It is estimated that in the first three years this game was played by 25 million people in America alone. It was Capcom’s most successful game during the upcoming two decades.

The Street Fighter II slot was developed by Amaya, a smaller company that has nevertheless produced a number of highly enticing games, including among other Emerald Isle, King Kong, Pot O’ Gold, Noughty Crosses and more.

Who doesn’t like the barcoded bald-headed assassin who goes by the codename 47? Okay, he is not the most likable character, but the game definitely made a mark in the past few decades. There have been more than few sequels and the games are available on multiple platforms. That fact alone speaks volumes of its popularity.

The slot game was developed by Microgaming, one of the most successful online slot developers, and in the opinion of many online slots fans – the company that has created and released the best online slots. Microgaming slots are particularly renowned for their graphic features, and Hitman is no exception.

The game comes with four bonus features, including the Contract Bonus and the Insignia Bonus, both of which are quite exciting and unique to this game.

Another slot based on a 1990s classic and another Microgaming title. Yes, this is a slot based on the most famous fictional archaeologist Lara Croft. The slot is based on the game, not on the movie of the same name, so you won’t see Angelina Jolie on the reels. But this shouldn’t disappoint you, as the game is pretty amazing regardless. The layout is simple and straightforward, there are five reels and three rows and the buttons are below the reels.

This game comes with two bonus features – Tomb Bonus and Free Spins, the first is triggered by the idol symbol and the second by the Lara Croft symbol.