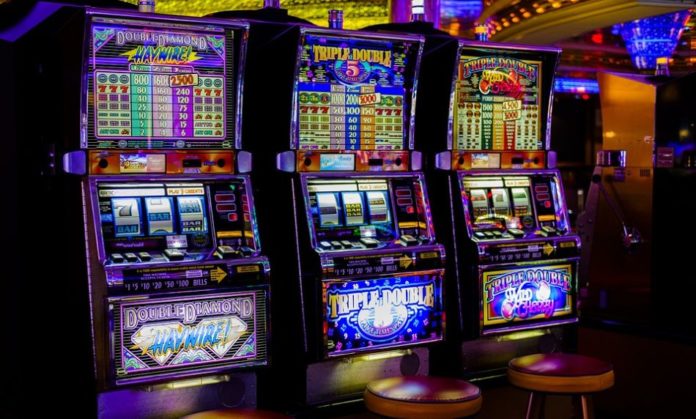 It’s impossible to ignore the popularity of slots, whether played online or at land-based casinos. From their humble beginnings as three spinning fruit reels with a simple win or a loss for each spin, slots have proliferated into a seemingly inexhaustible array of sophisticated graphics, intriguing characters and storylines drawn from different cultures, legends, TV and movies.

While winning is certainly the biggest motive and the most fun, the increasing array of complex video slots in recent years indicates that players are also attracted to the entertainment value that additions such as bonus features bring to an otherwise relaxing and repetitive pastime.

Below you can explore our compilation of the top ten slot games of all time, each one encompassing one or more of the qualities mentioned above. From the mega money-spinners, to slots with intriguing themes and truly creative bonus features, our list covers the spectrum of hugely popular slots available today.

Megabucks
Megabucks, developed by International Gaming Technology (IGT), is easily the most famous slot machine thanks to its astronomical jackpot payouts. In 2003, a very lucky man playing this slot hit the largest slot jackpot ever awarded — $39.7 million. Just like most popular progressive slots, the game is networked in casinos all across the state of Nevada. Each spin costs one dollar, but you can play up to three coins per spin, and players will need to play the maximum three-dollar bet in order to win the jackpot. Of course, there are plenty of smaller wins too. Online slot fans should note that the biggest progressive slot prizes on the internet are also shared across sites, with some pretty impressive jackpots to be won.

Mega Moolah
Mega Moolah is a 25-payline progressive slot on the Microgaming software platform. The slot has a jungle theme and the scatter feature, which triggers Free Spins, is represented by the monkey symbol and the wild card – a lion – doubles wins. Players can win one of the 4 Progressive Jackpots within the randomly triggered Bonus. By spinning the wheel, they uncover which Jackpot they have won. The four Mega Moolah progressive jackpots are the Mega Progressive Jackpot, starting at 1,000,000 credits; the Major Progressive, which starts at 10,000 credits; the Minor, which begins at 100 credits; and the Mini Progressive, which awards players 10 credits.

Rainbow Riches
The colourful, Irish folklore-themed 5-reel slot is hugely popular in the UK and can be found at brick-and-mortar and online casinos alike. The game, from providers Barcrest, was one of the first £500 jackpot slots in the region, and has a top jackpot prize of £200,000. Most famously associated with the slot is perhaps the exciting three bonus round – the ‘Road to Riches’, the ‘Wishing Well’ and the ‘Pots of Gold’. Lucky O’Leary is the leprechaun who keeps you company throughout your quest for the prize which – if you’re lucky enough – you’ll stumble upon throughout one of the exciting bonus rounds when you choose between the 1 and 20 playline. “There are three additional variations of the famous Rainbow Riches slot game; ‘Leapin Leprechauns, Fortune Favours, and Free Spins. All of them are hugely popular with UK players, and amongst the most frequently played slot games we offer,” says the online casino PlayFrank.com.

Starburst
Starburst is a Net Entertainment-powered video slot with 5 reels and 10 paylines. You can play from as little as 10p a spin to £100 a spin. The slot’s dazzling graphics feature five sparking jewel symbols, the triple bar symbol, the triple 7 symbol and a shiny starburst wild symbol. You can expect to win more frequently on this slot game because there are fewer paylines and symbols than most other slots. Although it doesn’t have a free spins option, when the starburst wilds appear on either of the three middle reels, they can expand over the entire reel and remain for up to three re-spins (essentially free spins).

Wheel of Fortune
Wheel of Fortune, created by IGT, is a little different to your typical 5-reel slot in that reels 2 and 4 have 4 rows and reel 3 has 5. These extra symbols mean more chances to win – in fact, Wheel of Fortune boasts an impressive 720 ways to win. While it feature symbols are reminiscent of the original ‘fruit machines’, the game play is entirely innovative. This slot features two different bonus rounds, both of which (unsurprisingly) involve spinning a wheel to determine the value of your prize. One of these games offers much bigger wins than the other and is consequently much more difficult to trigger. However, both bonus rounds offer the chance to win some fantastic prizes. Standing at 250,000 coins, Wheel of Fortune’s jackpot can’t compete with many of the huge progressive real money jackpots out there – but it’s still more than enough to keep many slots fans satisfied. Of course, the good thing about this jackpot (compared with progressive jackpots) is that it’s fixed – whatever coin size you’re betting, you know exactly how much money you’re going to be able to cash out if you do get lucky.

Mega Fortune
Mega Fortune from Net Entertainment is themed around a retro 70s aesthetic with all the trappings of the rich and famous – yachts, stretch limos, gold and diamonds, – and a jazzy soundtrack to add to the atmosphere. This 5-reel, 25-payline slot features special symbols including a Wheel of Fortune bonus, a speedboat wild and a scatter symbol featuring champagne and a couple of glasses which triggers free spins. To access the Wheel of Fortune – which is the key to the progressive jackpot – you’ll need to land three or more of the bonus symbols from left to right on successive paylines. The outer wheel will spin and will reward you either a cash prize or an arrow to the next inner wheel. Here you can win another cash prize, an onward arrow or the Rapid progressive jackpot. On the next inner wheel is an even bigger cash prize, the Major progressive jackpot or an arrow to the ultimate Mega progressive jackpot. In August 2018, the slot game paid out a jackpot of €6.7m just three hours after the player signed up the online casino.

Koi Princess
Another great slot from the Net Entertainment stable, Koi Princess combines imagery based on contemporary Japanese anime with traditional cultural artefacts. Koi Princess is visually pleasing and offers some great gameplay with a rich variety of features. These include the Wild Reels Random Feature – one free spin and between 4 and 9 wilds; the 5 Hit Random Feature which gives you one free spin with a 5 of a kind win; and the Bonus Activation Random Feature where you get 1 spin and one of 3 bonus features will be activated. Probably the most rewarding feature of this game is the Sure Win Free Spins, offering 10 free spins and lots of wilds with opportunities for big wins.

Gonzo’s Quest
Yet another winner from Net Entertainment, Gonzo’s Quest is based on the conquistador Gonzalo Pizarro and his mission to navigate through the Amazon jungle to find the fabled lost city of gold, Eldorado. One of the slot’s innovations is the use of ‘Avalanche Reels’ where the symbols tumble from the top rather than spinning on reels. The Mayan themed symbols explode and disappear when a winning combination is formed, then the remaining symbols fall into the gaps with new symbols appearing at the top to fill the spaces and triggering the multiplier meter. The main feature of Gonzo’s Quest is the Free Falls Bonus feature – this is triggered by getting 3 Free Fall scatter symbols on 3 consecutive reels, awarding free spins (or free falls). With every win, the multiplier value increases up to 15x. Gonzo becomes quite animated when you win – dancing around and even doing a little moonwalk!

Cleopatra
Cleopatra is a 5-reel 20-payline slot game running on the IGT (WagerWorks) software platform. The game is based on the controversial last Egyptian pharaoh, with an ancient Egyptian theme. Like the character herself, the slot has stood the test of time and remains hugely popular. Cleopatra has a 10,000 coin jackpot which is activated when five Cleopatra symbols appear on the reels. Cleopatra is also the wild symbol – and can change to ‘Double’ to double up any wins. The Sphinx is the magic symbol – getting 3, 4 or 5 Sphinx symbols in any position across the reels will initiate the Cleopatra Bonus feature – this is a free spins bonus round where you are initially awarded 15 free spins and during free spins round, all winnings are tripled. The soundtrack includes a woman’s voice encouraging you and wishing you luck. This slot also has a popular sequel, Cleopatra II.

Twin Spin
The simple and clean but sophisticated graphics of this slot and soothing soundtrack make this Net Entertainment offering a really pleasant gaming experience. The symbols will be familiar to anyone who has ever played a fruit machine with A to 9 playing cards alongside cherries, bells, bars and lucky 7s. Twin Spin does not offer a free spins feature – this fruit machine reboot is all about the Twin Reel feature where 2 reels will show the same symbols – it can expand to give you up to 5 reels with the same symbol to give you potential payouts of 1,080 times your stake on each spin. The most rewarding symbol is the diamond, which awards 1,000 coins if you land 5 on a payline.

It’s a challenge to compile a definite round-up on a topic with so much variety and history. Slot games appeal to players for different reasons, and there are countless variants across real and online casinos. With consideration to legacy, graphics, gameplay, jackpot and suspense factors – these are the top ten games with which any slot fan should be familiar.