Gamers certainly had a great time at CES 2009, where lots of interesting projects were announced. One of them is related to joysticks, those peripherals that for some reason appeared to be dead for quite a while now. However, Mad Catz have another opinion and in order to prove everybody that playing games with a joystick gives you an unique feeling, they introduced two joystick concepts which seem to be taken out of a sci-fi manual.

The first joystick presented by Mad Catz over at Kotaku is called Saitek Aviator Flight Stick and it is aimed to console owners (especially Xbox 360 fans, as the little green logo on the joystick suggests). However, if the AV8R is not quite impressive and you decide against paying $40 for it, the second joystick presented at CES by Mad Catz is much better looking!

You can admire the beast below and you can have in mind that it is called the Cyborg X. It all makes sense, I can say since it looks like nothing I’ve ever seen before. However, it does not appear to be easy to handle at all… or maybe it’s called “Cyborg X” because it has its own mind and you only look at it play, just like in Nintendo’s dreams… I guess those who will purchase the product for $50 will find out for themselves. 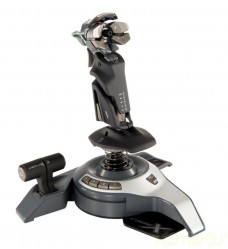