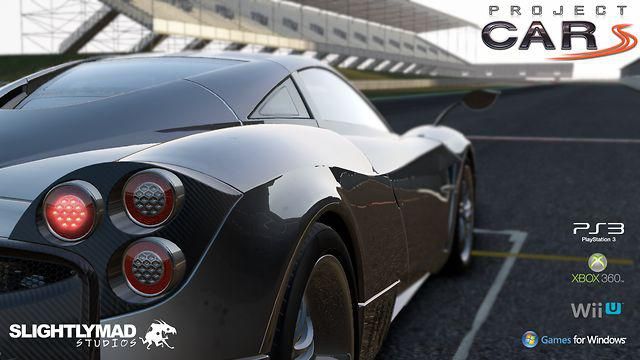 The world of racing games has gotten pretty stale in my opinion over the last few years with titles like Forza Motorsport and Gran Turismo nothing much more than car collecting games with nice shiny visuals, but very little emphasis on the actual excitement of racing a car against other cars around a track. I’ve thought for many years that there has been a gap in the market for a racing game that brings back the excitement, speed and competitiveness of motor racing, well Project Cars in looking to fill that gap.

Developed by Slightly Mad Studios who you may know as doing the Need for Speed Shift games from the last few years and if you didn’t like those games very much don’t let that put you off because this is a very different beast. I was not a great fan of the Shift games as I really disliked the way the cars seemed to pitch and bounce over the track and I didn’t really have much interest in doing the drifting events either and there was quite a few of those in these games. Project Cars feels very different, there is no drifting events, no car collecting,the emphasis is purely on the racing. Project Cars is currently at the alpha stage of development and won’t be released until 2013, but you can donate to the development process from as little as 10 Euro’s and download a monthly build of the game to play and you will get a discount off the finished version of the game when it gets a full release next year

To be a great racing game you need a good section of cars to choose from and some great tracks to race around and Project Cars has got both of those covered and then some. There is a superb selection of cars to choose from here ranging from 60’s, 70’s, 80’s Formula 1 cars to Le Mans racers, Audi touring cars, Zondas, Caterhams, NASCAR and Ariel atoms. There really is something here for everyone to enjoy and all the cars feel vastly different when you drive them. NASCAR’s have great straight line speed, but are slow to brake and feel heavy and clumsy around corners if you take them off oval tracks where as the Formula 1 style cars have incredible speed on straights and around corners, but you need cat like reactions to correct any slides or twitches to stop you form crashing into something. I usually play with the Zonda racers or the Audi touring cars which are both fast, but are reasonably forgiving to drive.

This game has just about every great race track from around the world that I can think of, Le Mans, Silverstone, Monza, Nurburgring, Imola, Bathurst, Catalunya, Road America, Spa, Suzuka are just some of the classic tracks featured in this game.

Visually it’s about the best looking racing game that I have ever seen. This game really flexes the muscles of a good PC with full direct x 11 support and no hint that the game is being compromised for a console version in any way. The level of detail on both cars and tracks is superb, extremely fine details can be noticed as you race along such as rubber marbles being flicked up by the car in front of you if they drive slightly off line and the detail at the back of the 1960’s Formula 1 cars is almost distracting if you get up quite close behind them. I did mention earlier that the game is only at the alpha stage of development so you do see a few tracks with missing or very bland textures, but have to look quite hard to notice them and they only really show up on the replays.

The sense of speed and excitement that playing Project Cars gives you hits you every time you play the game. The scenery really does go past you a quite a rate of notts and feels even more intense  when using certain car views like bonnet or roof. Mix that with the very sensitive collision detection and then you really feel like your race is always on a knife edge with one slight mistake could lose you several places just like the real thing

AI in racing games always seems to be a bit of an afterthought, but Project Cars in trying to bring a touch of realism into these games with cars not just driving around like robots with their cars on rails. You regularly see AI drivers outbreak themselves and run wide on corners, touch other cars and cause crashes and their not shy at trying to overtake you if you are slow on any area of the track to the point where they can be a little over aggressive and push you off the track or send you into a spin if you don’t see them coming through. Every aspect of the AI can be tweaked in the options such as overtaking aggression, starting reactions, defending and so on, so you finely tune the style of race that you want to be in. The fine tuning of your car setup is also important if you want to be competitive during races and there is a vast menu to go through with far to much detail to go into here, but needless to say that just about every aspect of the cars setup can be tweaked to suit which ever track you are racing on.

This has been one of the most exciting racing games that I have played in many years with the emphasis back on speed and the racing. Its a very interesting way of creating a game with people donating money to play the game at a very early stage and then giving feed back to the developer about what they like and don’t like about the game and what they feel the developers should be adding to make the game better. Its a system that seems to be working well at the moment with the PC community shaping the future of the game and also contributing financially in the game’s development with nearly 1.5 million euro’s donated so far. This is a system that will probably be copied by many other game studios in the future especially at this time of financial hardship and many game studios closing due to lack of funding. For more information on the game visit www.wmdportal.com.