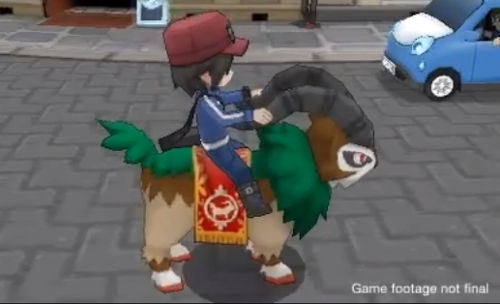 Those behind the upcoming Pokemon X and Y games have today unveiled a trailer that details some of the gameplay that players can expect of the titles.

The first part of the video shows off the two player characters walking around, which is riveting stuff. On the plus side it does give a bit of an overview of the new 3D exploration, as well as showing off what Pokemon cities look like from the ground.

The second half of the video however, shows off four Pokemon that are debuting in X and Y, as well as some new moves. Fletchling is a fire/flying type, a bird that can increase its speed as well as dealing damage with the Flame Charge attack.

Also seen is Pancham, a fighting style Pokemon that can learn the Parting Shot ability. This move lowers the attack and special attack stats of the enemy, and also immediately swaps out with an ally who can take advantage of the weakened opponent.

Helioptile is an electric reptile, capable of using the Parabolic Charge attack. This hits everyone around the Pokemon, and also heals Heliptile for half of the damage he inflicted.

Finally, Gogoat is a grass type in the form of a large goat, capable of using Horn Leech to deal damage and heal for half the attack’s power. In addition Gogoat will be rideable during city exploration, with the developers hinting that he’ll be necessary to travel in certain areas.

Pokemon X and Y will launch in October.