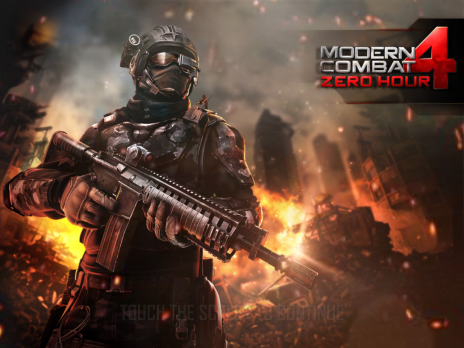 Mordern Combat 4: Zero Hour is the latest Gameloft’s title for mobile iOS and Android devices.  The game presents a new warzone story, after a nuclear disaster the only chance for humankind lays in the hands of a few soldiers, whose mission is to rescue the world’s remaining leaders from the hands of terrorist groups.

The fourth game of the series introduces some new technical innovations. It’s the first Gameloft’s title powered by the Havok Engine, the graphics and effects have received a general boost. A new animation and movement system has been introduced too, making the game much more vivid and intense.

In this title you can play as the marine forces but you’ll be able to play as Edward Page too, the main villain of the plot.

New gameplay features have been introduced to the game. In the ranking system, you’ll be able to forge your reputation and make it to the top of the leaderboards. Gameloft has created a new loadout system too; the profile customization has been severely enhanced. More gear is available as well, there’s over 20,000 weapon combinations.