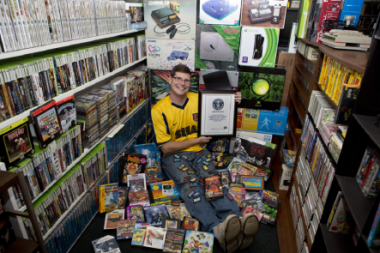 Michael Thomasson, a 31-year-old New York father, has set the Guinness World Record for the largest game collection in the world. According to Associated Press, the man owns about 10,607 games and all of the game systems to play them on.

Thomasson, who lives in Buffalo, has rare systems such as the Japanese exclusive Casio Loopy, the Colecovision, and the Pippin. The Colecovision also is one of Thomasson’s favorite systems to play on. Thomasson can be quoted from the recently released Guinness World Records 2014 Gamer’s Edition saying, “It’s my first love so it’s sentimental. But the games also were quality, with very little of the ‘shovelware’ typical of many systems.”

Thomasson initially had to sell his collection back in 1998 to help pay for his wedding, but has since been buying two games every single day with a $3,000-per-year budget. His collection is now worth around $700,000-$800,000. Ever since the Guinness counting crew departed Thomasson has gone on to own over 11,000 games and systems in total.

Richard Leece, who was the previous record holder with over 8,000 games, congratulated Thomasson on his accomplishment. “My congratulations to a fellow collector,” he said, reacting to the news. “It’s very impressive and I’m very happy for him.”