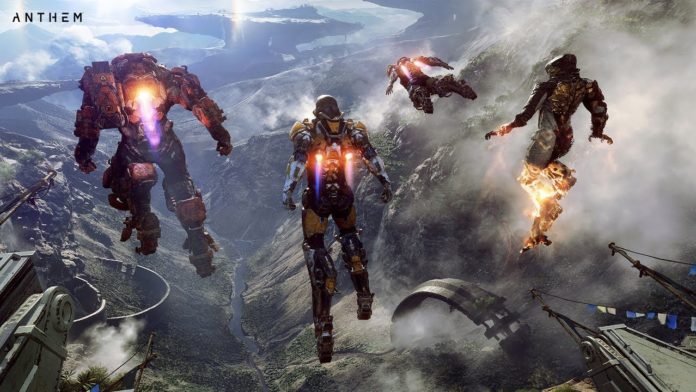 In the recent weeks leading up to the release of Anthem on February 22, the fandom and general public alike has had a love hate relationship with the game itself. EA is no stranger to controversy surrounding their titles, for example let us go back only a few months to the terrible launch and sales of battlefield 5. The game fell off the map before even getting a true chance to shine due to poor management of a staggered release, and controversial placement of story elements for a political agenda. The game did and still is not doing well, some have even created the game into a meme “genderfield 5”. This is all due to mismanagement of IP on EA, and some see the writing on the wall with their upcoming release Anthem.

Anthems demo was satisfying when it operated properly, which was rarely. Some players claimed that they spent hours between not being able to log in to getting the black screen of death after the title menu. These are things that might be common in a alfa, maybe even a beta but not a demo.

Demo’s are supposed to be presented as a sneak peek at the finished product. This was not a finished product, in fact to counteract bad press EA released a statement saying “It was a previous version of the game they used for the demo”, wait what? A “Previous Version” that seems a little fishy EA. Below is a video in more detail about the demo riddled with problems.

The economy in any new game is always a topic of discussion throughout the gaming world. This is primarily due to companies like EA and Activision adding microtransactions and glorified gambling loot boxes into almost every new title. This is a greedy company creating a market to further exploit gamers for every penny they own. Don’t you remember the good old days where a company released a game in its entirety from day 1.

Now i’m not condemning all dlc to the trash heap but if you take something out of the original game purposely so you can sell jt later for more money, there is a problem. Spending sixty dollars on the main game, then buying the “season pass” that truly only gets you a few things that are set to come out for thirty to fifty already sets you back more than a hundred dollars just to experience the full game, that should be criminal.

Anthem has already set a presence in this ludicrous microtransactions world we live in. Everyone knew being a EA game that Anthem would have some microtransactions, but a recent leak on twitter revealed that at one point in time a simple skin for you javelin might cost you 20 usd. That’s after paying sixty for the title. The developers then said as a rebuttal to this that the economy is very different in the finished game and is ever changing. Yea Ok.

Bioware and EA may have leaked this information as a tactic to please the masses with a lower but still ridiculous ten dollar skin price. Raise the prices so you can drop them to please the consumer, basically created your own market price. The things this company will do to gain profit is hilariously enraging some times. The video below goes into even more detail of this ploy that EA could be using to trick the consumer.

Finally Anthem is weeks away from release, and even though many things have gone wrong it still excites many people. It is one of the most anticipated game of 2019 and two weeks before launch EA drops a staggered release chart to explain how some people will get to play the game February 15th and some people have to wait until February 22nd.

Now this may not seem like a big deal but to some consumers, the ability to play the game early is immeasurably enticing. So when EA says “ hey any premier origin access member can play the full game two weeks early” people go insane. The premier access is a paid subscription to EA through origin.

This is a last ditch effort from EA to create a cash grab before the games launch. The way that EA rolled out this news basically says to consumers “If you pay us more money, you get the privilege of playing early”. The worst part of this is even the people that already fully pre-ordered the game don’t get that access. Only premier cash cows can get the privilege. To explain this phenomenon more in depth please watch the video below.

In conclusion the once great video game phenom that is EA has proved again and again that it cares more about money than they do about gamers. I too was one of the people hyped for anthem, and i to be honest still am but the tactics that the developer has used to essentially scam us as a consumer base is appalling. It makes me second guess buying the game at all let alone on release day. This is a game I will be watching very closely. I hope all the readers out there take head to this warning and are not surprised when the worst comes to pass with Anthem.