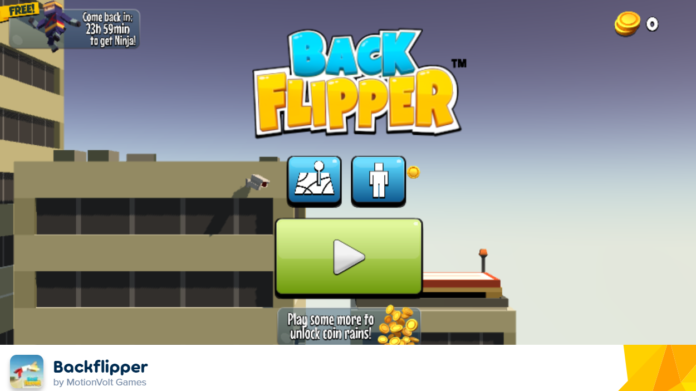 Have you ever wanted an unconventional job? Sure, you might be proud of the work you do in your current position, and rightfully so – you probably work very hard. Sometimes, though, it’s nice to daydream about having the kind of occupation that turns people’s heads at social functions. We’ve had our fair share of eyes glaze over when we’ve tried to explain previous jobs we’ve had, and we’d give anything to have a snappy, exciting description of what we do.

One suspects this isn’t a problem the protagonist of Backflipper has to worry about. Backflipper is the latest game from Finnish developer MotionVolt, whose previous titles include the excellent Flip Master and the underrated Flip Diver. Both of these games concern the defiance of gravity by a particularly dedicated and enterprising individual, and you’ll be pleased to learn that this new Backflipper game is no slouch in this department either. Whether it continues MotionVolt’s run of form remains to be seen. 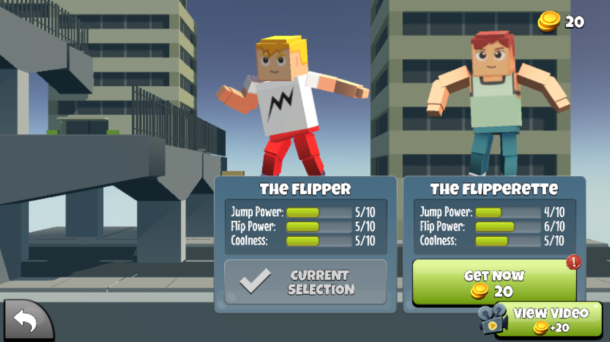 If you’re unfamiliar with the history of MotionVolt, it is worth going into, at least to some degree. MotionVolt was founded by Atte Ilvessuo, one of two Finnish brothers who were responsible for the creation of Trials developer RedLynx. That heritage is on display in MotionVolt’s other titles, too – it’s easy to see the Trials franchise’s simple physics puzzles and monstrous difficulty on display in both Flip Master and Flip Diver, especially as things progress towards a conclusion.

Backflipper is no exception. True to MotionVolt’s form, it features a protagonist whose entire existence revolves around flipping. Narratively, obviously, the game isn’t up to much; we’re not sure anyone is in this for the story, but if you do need any kind of solid context for why the President of the United States has decided to navigate a precarious series of rooftops using only a particularly difficult gymnastics move, you might be out of luck.

Those who remain – which we suspect will be everyone – will find a delightful little physics platformer-style game with some elements of sports sims thrown in. If you’ve ever played Mario Golf or any golfing game released in the last few years, then you’re probably already familiar with the basic premise of Backflipper. The mechanics hit that sweet spot of being easy to learn and hard to master; you’ll pull off at least one or two lucky flips at first, but it won’t be long before you’re yearning for a tighter grip over the controls.

Let’s back up a bit. Backflipper is essentially a series of jumps across a number of rooftops, with collectible coins available along the way. To pull off the perfect jump, you’ll need finesse, forward planning and a bit of luck. Your character begins on a rooftop, and the next rooftop is both easy to see and easy to reach. A small arrow appears above your head, tilting back and forth to indicate the direction of your next jump. Pressing the left mouse button will catapult you into the air. Pressing it again will orient you for a landing. 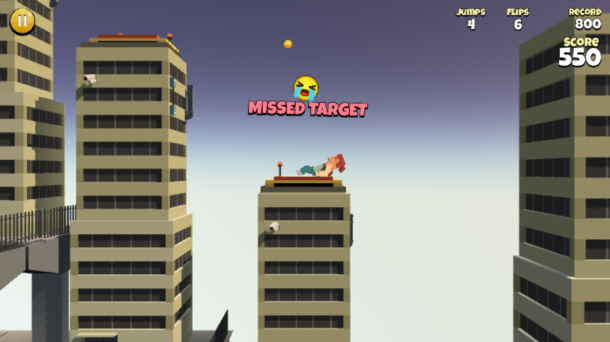 This might sound easy, but the truth is that Backflipper makes you work for your victories. Leaping with the right trajectory is absolutely crucial, because if you whiff your jump direction then only failure awaits you. Part of the game’s joy is the sheer comedy of failing a jump, though, thanks to Backflipper’s raucous physics engine. It’s just a laugh to watch your character pathetically slide off a rooftop having completely failed to land a jump, so even if you do spend a lot of time failing in Backflipper you’ll still be having a great time.

The second half of jumps in Backflipper is the landing, and this is arguably the trickier part. Clicking the left mouse button while in the air will ready your character for landing. It doesn’t matter where exactly you are in the air, or how you’re aligned with the ground; pressing the button will make the game think you’re ready to land, and that’s how you’ll hit the ground. Backflipper won’t accept anything less than a feet-first, perfect landing, though, so you’d better make sure you’re on your toes when you land (literally!).

These two halves go together to create a consistently compelling game. Backflipper takes an endless approach, unlike that of Trials, which means you can keep flipping to your heart’s content. Making progress through a level will earn you points, and the better your jumps are, the more likely you are to be able to grab coins, which hover tantalizingly out of reach, waiting for you to perfect your trajectory. Coins can be spent on unlocking characters and stages, each of which add their own little joie de vivre to the game; bouncing around as an astronaut, a secret agent or the President of the USA is always a joy.

In the end, it’s not difficult to recommend Backflipper. As we’ve come to expect from MotionVolt, the game is addictive, enjoyable and riotously funny at times. Flip your usual schedule on its head and check this one out – you won’t regret it.