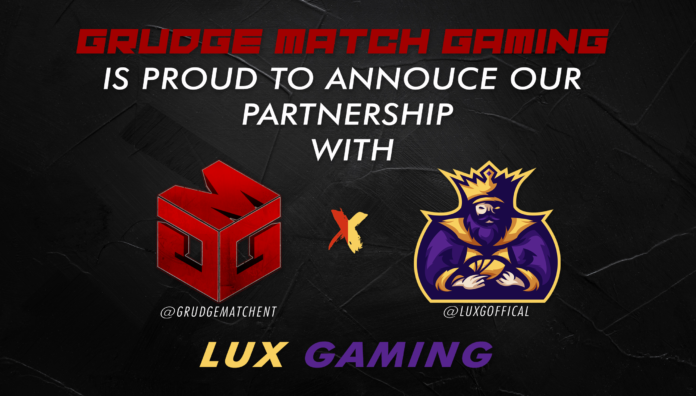 The much anticipated open beta testing of www.GrudgeMatchGaming.com (GMG) desktop version is officially underway! GMG intends to take the lead in online competitive gaming platforms (after officially launching). The first 1,000 beta testers will be awarded 1,000 MRX to engage in matches and leaderboard challenges. If this wasn’t an already exciting introduction for GMG on the eSports scene, this platform finds even more promise with it’s latest affiliation.

GMG and LUX Gaming officially announced their partnership on Tuesday August 13, 2019. LUX Gaming, a professional eSports organization, is most recognized for their highly skilled Halo and Gears of War teams. A collaboration between the GMG platform and LUX Gaming is a strategic relationship. One of the more alluring aspects of this partnership is LUX will be dedicating and naming a stream team exclusively after GMG. With 27 LUX streamers consistently producing content while simultaneously promoting and endorsing GMG, the mutually beneficial exposure is sure to gain some attention.

However, the partner’s agenda doesn’t stop there. LUX will also be representing GMG on the battlefield while attending events and live competitions. This dynamic will add a boots on the ground marketing element. Along with a host of other objectives the 2 entities plan on accomplishing, this appears to be the tip of the iceberg.

GMG is gearing up and entering the eSports arena prepared. By pairing up with talented teams, organizations, and leagues, the real advantages of this monumental platform will be undeniable. Some of the key features that makes GMG different is a collection of classic and the latest released games. No subscriptions, no minimum buy in, and by harnessing the potential of crypto-currency, GMG is targeting a wide ranging userbase. Gamers will have the ability to customize profiles, gain a following/ranking, and earn a living from their skills. The inspiring GMG roadmap, although ambitious, is a recipe for a successful venture and highly utilized platform. After the open beta process has concluded, the full site will be released with full profiles, badges and achievements, trollbox chat, full GMG game library, and an array of other features that will be implemented for the official launch. Currently, users can enjoy testing the Head-2-Head and Leaderboard challenges for over 20 games including Mortal Kombat 11, League of Legends, Overwatch, DOTA 2, Fortnite, and Apex Legends.