According to urban legend (and Wikipedia), the spinning toys were invented over 20 years ago. But they’ve gained an insanely high amount of popularity in the past couple of months. For those of us who want to play without spending any cash, there’s a solution. It’s the same solution for playing in places where fidget spinners aren’t allowed: video games!

Spinning Online
Gaming portal Poki has a growing assortment of fidget spinner games. The action ranges from realistic simulations (e.g. Fidget Spinner High Score and Fidget Spinner Extreme) to loosely related, equally addictive fun (e.g. Pineapple Pen and Bottle Flip). The sims allow players to have fun with a huge collection of virtual toys. Just like their real-world counterparts, the spinners in these games range in color, size, and design. Practically every variant is here, from brightly painted, four-bearing units to slick, chrome dual-rollers. If you’ve seen it in stores, it’s in these games. If you haven’t seen it in stores, it’s probably still in these games. Awesome! 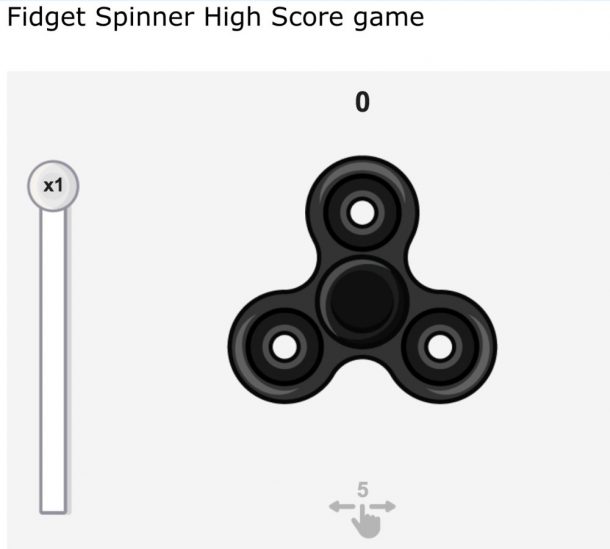 The realistic fidgeting games also include cool extras, such as power-ups that enhance spinning capabilities. You can add some lube to the bearings and increase the max RPM. Then, get ready to set new spin records.

In the world of gaming, anything is possible. Spinz.io is a multiplayer game that takes our trend of the year to new heights. Spinning is no longer a solo activity. Instead, it’s the only way to survive a highly competitive .io battleground. If you’ve played any other .io games, you’re already familiar with their free-for-all nature. Spinz.io is no different, pitting players against each other to see who can rotate the fastest. It’s a clever way to capitalize on two crazes at the same time.

Other Crazes
There isn’t a plethora of fidget spinner games available. So, the collection on Poki also includes a few similarly addictive games. The Pineapple Pen series dares players to stab pieces of fruit. As strange as that may sound, it’s incredibly fun. There are spinning apples, lemons, and oranges. Much like with fidget spinners, the concept is delightfully simple. Such a low barrier to entry results in fun for all ages.

Do you remember bottle flipping? Last year, it was all the rage in schools across the globe…until it got banned. Well, you can still flip as much as you’d like in Bottle Flip. There’s a daily flip challenge with unique rewards. Best of all, you won’t annoy anyone else in the house.

The Future
The glory of Poki’s Fidget Spinner category has just begun. As developers race to make the next hit game, we’re bound to benefit. For now, you can enjoy a small-but-mighty assortment of solo and multiplayer games. Put down your fidget spinner, and spin into these games!