A great new update has been introduced in FarmVille today, enhancing the way fertilizing crops works. Therefore, starting today, you can not only fertilize the planted crops, but also plowed land and fully grown crops!

I know I will really appreciate this new fertilizing feature since I have quite a few neighbors that are not as active as they used to be and my visits to their farms resulted in no spots to fertilize. But today that problem will be solved since I will at least be able to fertilize their grown crops or plowed land, which means I’m not wasting time. And nor will you!

I have already tried the new feature on one of my neighbors’ plowed lands and indeed it works, as you can see in the image below (click to enlarge). This way it will also be a lot easier for us to get the Crop Whisperer Blue ribbon faster. Really cool update, finally something that’s really useful to all FarmVille players! Do you agree? 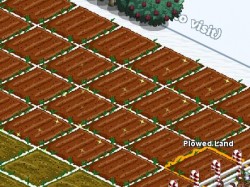