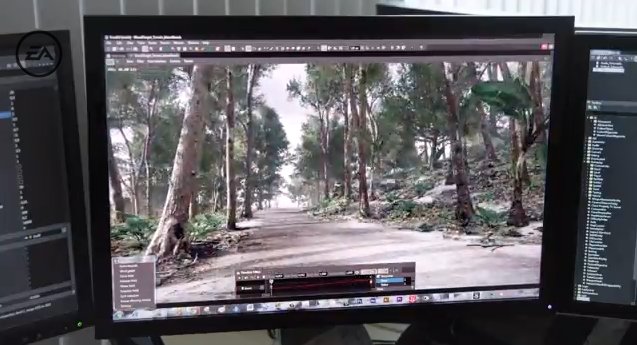 Battlefield 4 developers Dice released a new video to show the power of their next-gen Frostbite 4 engine. Battlefield 4, released this year, will be the first game to utilize the new engine.

Dice promises it will return the destructibility gameplay seen in Bad Company 2 to the Battlefield franchise. As seen in the multiplayer reveal, Frostbite 3 allows players to demolish an entire skyscraper. According to technical artist Andy Klein, Battlefield gamers will get a much more ‘authentic, believable and realistic’ experience from Frostbite 3.

Along with destructibility within multiplayer, debris from collapsing buildings and explosions can restrict visibility. When a building collapses in Frostbite 3 it gives rise to a dust cloud of debris, making life hard for players who stick to helicopters.

As with most types of videos showing off a new game engine, it focuses on the engine creating a realistic and changeable environment. Cue the usual montage of trees blowing in the wind, rolling waves, along words like dynamic and evolution. Albeit the same promises as Frostbite 2, Dice’s new engine is impressive. Using the environment around you as a gameplay tool has always been a part of what Battlefield is on Frostbite. And it’s a welcome return to see destructibility become a key part of online gameplay again.

But it’s worth noting in a video like this that it’s not clear which platform the game you’re seeing is playing on. The Battlefield 3 and Frostbite 2 reveals were both powered by a PC rather than a console. While Battlefield 4 looks very impressive to date, the same was said about Battlefield 3. The console version of Battlefield 3 turned out to look a little lacklustre when compared to the same game on the PC. Have a look at the video below and decide for yourself. Battlefield 4 will release on October 31 on Xbox One, PS4 and PC.

But what do you think? Is it impressive? Will Frostbite and Battlefield deliver on next-gen promises?