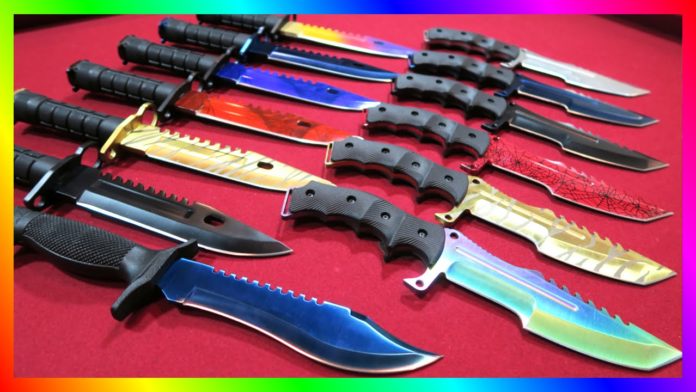 Counter-Strike: Global Offensive knives are an essential component in gaming and are often sought after by gamers. These knives are available on the steam market and are sold at various prices depending on their value. Although rare, the knives are worth collecting as they enhance one’s gaming experience online.

CSGO knives are hard to find because they are only acquired when cases are opened. The cases can be bought from the steam market or can randomly drop when you are playing a game. Most times the cases contain a knife but it is not possible to know the exact type until it is opened. Some of these knives include:

The knife has a distinct design that has not evolved much since World War II and is considered one of the favorites of gamers. Some of the distinct features of the knives is a straight back blade, and a firm handles ideal for combat.

The design of the blade, which includes a gut hook, is the unique feature noticeable on the knife. Its hook is ideal for cutting through various materials with a lot of ease.

These knives have a curved blade that looks like a claw and is often used by gamers during combat. At times, the blades may differ in design, but the general appearance remains the same.

The knives are designed to resemble ancient Persian weapons which have back- swept edges and an acute point.

The economy on which csgo skins and knives are bought or sold can seem overwhelming for those that are discovering it for the first time. CSGO knives are available in a variety of styles, which makes it possible to find the best one for you. Some of the knives are sold at affordable rates while others can be bought at ridiculous prices depending on the value they offer online gamers. Some of the knives that are ranked in the category of “most expensive” are listed below.

The M9 Bayonet Lore is popular among CSGO enthusiasts and is one of the most expensive to buy. The knife is designed uniquely, and its size is perfect for those in need for such weapons as part of their collection. Apart from having a perfect size, it also has many features that set it apart from others that may be priced within the same price range. Currently, it is sold from $1400-$1500 on the steam marketplace.

If you are looking for a CSGO knife that brings out its toughness just from its appearance, then the Karambit Lore is your best choice. Its blade resembles the tooth of a shark making it stand out from the rest in the “expensive” category. Additionally, it is sold from $1000 -$1100 on the steam market making it worth the investment for any gamer.

CSGO enthusiasts with a budget of $900 or slightly above can purchase the Ursus Knife slaughter as part of their collection. The knife, which is available on the steam market has a minimalist design which makes it easy to notice at first glance. In addition to the unique design, its reddish tint color gives it an extra feature that makes it part of the most expensive category of knives.

Butterfly knife skins are another popular type of knives in CS:GO.

It is rated as the most fun knife to use for gamers because of its different animations. Its ultraviolet skin is also another feature that sets it apart from other knives and contributes to its high price. Gaming enthusiasts that want to purchase the butterfly knife will pay between $800 and $900 to have it in their possession.

Knives that have a distinctive design are quite popular with the CSGO community with many of them looking to add them to their collection. The Talon knife fade is one such knife which has a visually appealing design including a Glock. These distinct features have made the knife quite expensive when compared to similar ones. To buy the knife whose blade resembles an eagle’s talon, you will spend at least $700 to $800 on the steam market.

The Bayonet Knight is an excellent combination of visual appeal and functionality making it a “must have” knife for CSGO lovers. The knife which can be bought at $650 or slightly above is available in all black making it one of the most appealing knives in this category. Its blade is narrow, and it has a straight back which is different from other knives such as the M9 Bayonet. Generally, if your goal is to buy a knife that offers value in terms of design and cost, this is the one for you.

For the price of $850, you can have your in your hand the most in-demand CSGO knife in the steam market. The knife is quite rare which contributes to its high price but is worth buying as soon as you spot one. Its blade brings to mind a claw which is associated with power and strength making it the ideal weapon to have in your collection. Additionally, its blade has a reddish tint that contributes to its pleasing appearance to most gamers.

Visually appealing knives are a favorite of most gamers that regularly shop on the steam market. It is common for players to quickly pick out the Bayonet Autotronic because of its colored handle and blade. The knife has a blade that is silver and red which makes it stand out in the marketplace and also while in use. Its handle is silver and black which gives an interesting contrast to the blade resulting in an overall look that is quite attractive. Gaming enthusiasts that are ready to spend $750 can have this beautiful weapon as part of their collection.

Overall, CSGO knives are worth investing in as they make playing your favorite game much more fun and earns you bragging rights as well.