There are all sorts of boosts available in Treasure Isle and many people were wondering when will the tools get some boosts of their own. The answer is clear now as Zynga has just released the Tool Boosts in Treasure Isle. And, as always, we have all the details for you right here!

What are the tool boosts in Treasure Isle?
Some really useful goodies that can be purchased (for TI cash only, unfortunately) that offer some really big advantages: -1 energy consumption when using the respective tools, but for a week only! This means that in the end you can dig longer, stronger and get more treasures! Here are the tool boosts available for purchase in Treasure Isle and their costs: 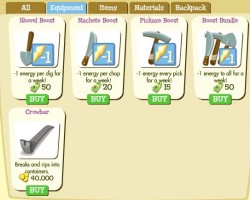 Of course it appears that Zynga have messed up the prices a little, since I doubt anybody would pay 50 cash to get the shovel boost only when the boost bundle is available at the same price and includes all three boosts available in the game… but maybe that’s the whole point, in the end.

Either way, I am really curious: will you purchase any of these Treasure Isle tool boosts to save some energy for one week?