The most important part in King’s Bounty: Legions is taking part in battles. There are two types of battles available in the game: PvP battles (against real players) and Quest battles part of the campaign. I am here now to share with you some tips and tricks that will make you a better player during battles and you should really read on this guide to King’s Bounty Legions battles if you want to know everything about fighting in the game!

First of all, it’s worth mentioning that starting a battle will cost you 5 stamina points and won’t require any further stamina spending from your side. Once the battle starts, you must play it to the end, no matter if you win or lose. You can withdraw at any time to save your remaining troops and you only have a limited time to perform your moves.

It’s also worth noting that even though you can start PvP battles from any region you find yourself in, your campaign fights vary depending on the region. So you’ll have to travel across the lands for more battles. Now that we know these generic facts, let’s move to something more complex. 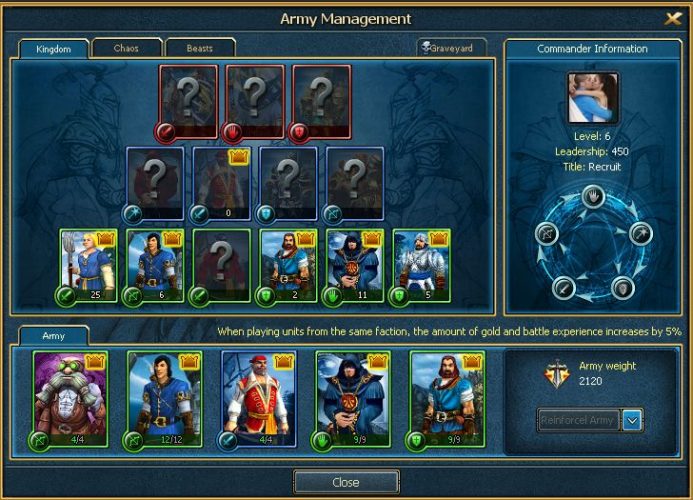 The screen above is the place where you have all the information about your army before battle. You can change the troops in your army (shown in the lower part of the screen), you can find all the information about the stats of your troops and you can even upgrade them. Try to always have the maximum amount of troops in your hero’s screen so that you fight with full strength each battle!

How to get more troops in your army?

There are more ways of doing so:

1. Battle hard. After various battles, different amounts of troops may join your ranks and they will be placed automatically in the Army management screen
2. Complete missions: some missions, once completed, reward you with different types and amounts of troops.
3. Purchase them directly from the Shop (shortcut: S). There are just 2 types of troops available in each location on the map, so you’ll need some planning unless you want to waste energy! 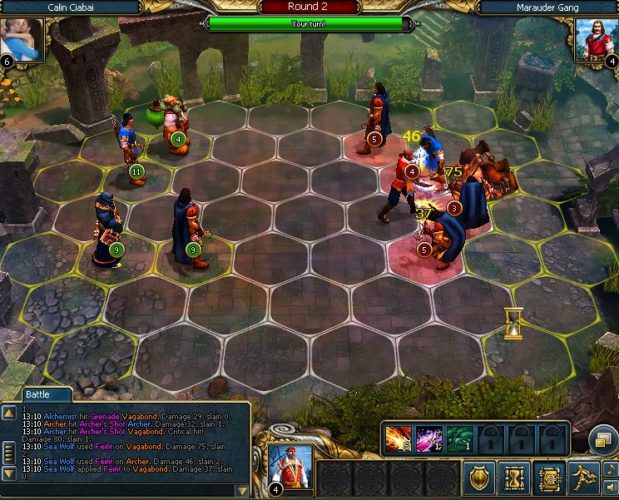 So, the preparations are done, it’s time for you to start the battle! This is how the battle screen looks like:

– You should have in mind that most of your troops have special attack moves (or defensive ones, like heal) and you should use them at the right time.
– Have in mind that usually, long range troops can move one step forward before shooting. This is really useful to do in order to reduce the long range penalty of your shots and inflict more damage
– Don’t rush into the battle. It’s a good strategy, especially when fighting against many hand-to-hand (melee) units to wait and see how the opponent moves.
– Don’t rush to use your spells. These are really expensive and you shouldn’t use spells unless necessary
– If you don’t want to spend real money to see the health of the troops, try to remember the stats of your own troops at least and the damage they received to properly use healing techniques when necessary.
– Always DO SOMETHING. I doubt there are many cases when doing nothing with a specific troop will give you any tactical advantage.
– Don’t be scared if you lose your first few serious fights. Learn from your mistakes and learn to use the advantages of your troops and keep their weaknesses at a minimum!

I guess that’s what you should know in order to be great at battling others in King’s Bounty: Legions. If you have any other tips and tricks to share, please feel free to do so in the comment section below!