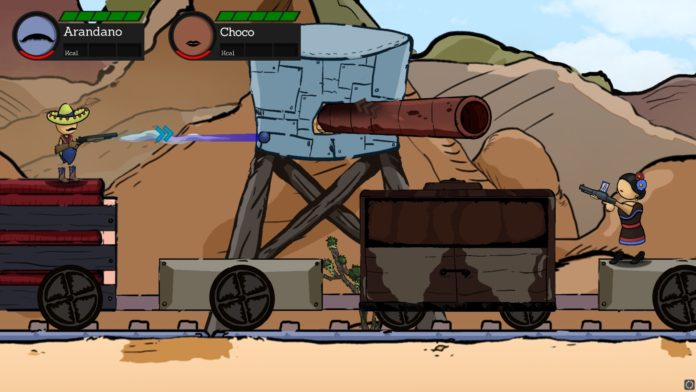 Ever wanted to stuff your friends full of tacos? So full that they burst into a cascade of candy like a poor pinata that’s about to get the stuffing beat out of it at a kid’s birthday party? Well, that’s an oddly specific wish, but you can make it reality in Taco Gun, a local multiplayer 2D shooter that’s all about… taco guns!

You and up to three other friends take on the role of a mexican pistolero. There’s Avocado Huan with his trusty Ricoshot, a gun that shoots whole slices of avocado. Yum! Then there’s Choco Margarita, who wields the fearsome Choco Knife, a rapid-fire rifle loaded with chocolate bars. We can’t forget Maiz Santiago, the man who rockets corn straight at his foes using his Bombshot launcher!

Taco Gun matches play out on 2D arenas, with some being literally out of this world. You can have classic western shootouts on the top of a speeding train, or you can raise the stakes by dueling in a canyon. If you’re feeling a little more wild, you can fight in space where planets zoom by in the background. Each arena in Taco Gun provides a neat little gimmick to give it some flavor, like a bird swooping by every now and then on the train level.

But we are not here to look at the scenery – we’re here to fire some taco guns! Taco Gun is compatible with controllers, and you’re going to want some if you really want to party. The controls are pretty simple: you’ve got a jump button, a fire button, a special button, and a reload button. You can wall jump if you jump against a wall! 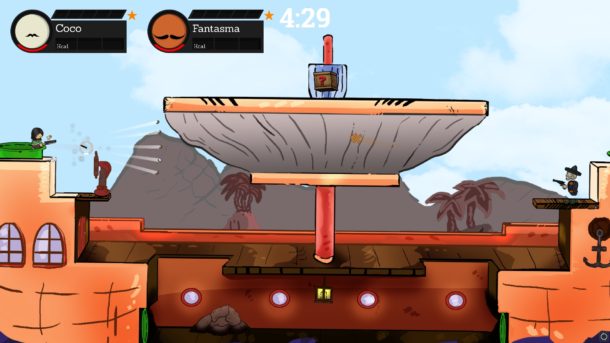 Your objective: force feed tacos and other delicious goodies to your opponents to make them pop. Your life meter in this game is a calorie counter. Yes, it’s that kind of game. The more full a pistolero gets, the slower they move, so take advantage of that! Shooting their head gives them more calories, so aim true!

Were you on the receiving end of a hectic taco encounter? Well, how do you normally get rid of excess calories? That’s right – move! Funny enough, moving your pistolero will reduce your calories. Work that taco belly off as we’ve got a shootout to win!

While the combat in Taco Gun is relatively simple, there are small little details like the moving calorie reducer that you have to experiment to find. For example, when you need to reload, a small part of the reload meter will be white. If you press the reload button again while the dial is in the white, you will instantly reload. So, there is some depth for those who want to become master taco guns. 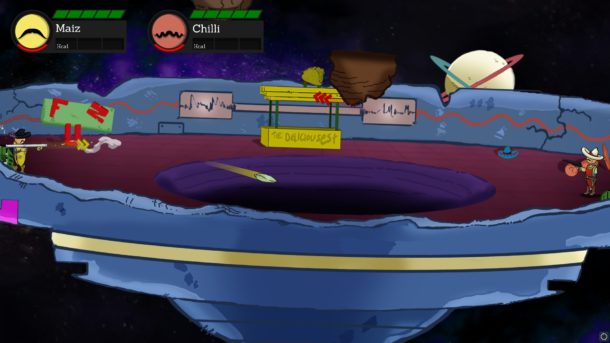 In addition to that, each pistolero has their own unique special ability. Attacking your opponents fills up your special meter, and once full you can unleash it! Avocado Huan throws avocado mines that split into avocado slices. Great for surprising foes hiding behind cover!

If you still need another ace up your sleeve, be on the lookout for question mark boxes. These boxes contain super power ups, like the all-mighty taco gatling gun, or a slow motion stopwatch, and more.

What surprised us the most was Taco Gun’s soundtrack. You have the classic western-inspired tracks, but you also have awesome, high-energy tracks that put you right in the action movie. Our favorite track has got to be the Space level music – that song just gets us pumped up!

Taco Gun is one of those “what you see is what you get” kind of games. It’s a goofy, off-the-walls multiplayer shooter. If you have some friends over and you are looking for a simple good time, Taco Gun is a great party game. Unfortunately though, as of writing, Taco Gun does not support online multiplayer and we are not sure if it is planned for the future.