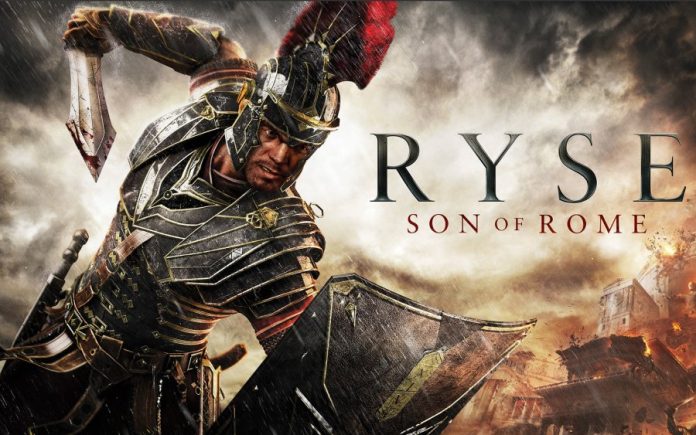 When Ryse: Son of Rome was first shown off at E3 2013, it was greeted with two main pieces of feedback. One response was the game looked great and it was an interesting premise. A third person action game set in Ancient Rome is certainly something an area that is new and exciting. The second piece of feedback was that the combat looked poor and too focused on quick time events (QTE). Ever since then the game has tried to show off more of what it has to offer and even changed it’s combat as much as possible but still staying true to it’s beliefs. Have Crytek managed to create an interesting action game or does it’s combat hold it back? Read on this Ryse: Son of Rome review to find out!

The story of the game has you take control of Marius Titus. A member of the Roman Legion who returns to his home in Rome to visit his family. His family reunion is cut short however when a group of barbarians attack his family villa and leave with his father, mother and sister all killed, driving Marius to seek revenge. He joins Commander Vitallion and the 14th Legion in the invasion of Britannia to seek revenge on those who destroyed his family. The story has a few twists, most of which you see coming a mile off but is enjoyable as you are taking on a war campaign through Britannia and eventually takes you back to Rome. It also includes some supernatural elements with a couple of ancient Gods taking an interest in Marius’s tale.

The campaign last about 5 hours depending on difficulty and if you are looking for the large amount of collectables. You also level up as you kill more enemies which allows you to upgrade Marius with more health and such or purchase more executions. Most upgrades however have little impact on the actual game as it really just makes a slightly better killing machine. 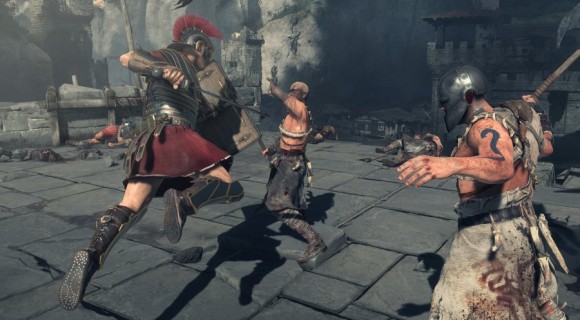 The game is presented brilliantly. The voice acting is very good and there are a few interesting character even if Marius himself is a little bland. The whole game also looks amazing. Despite all the talk of it not running at 1080p 60fps, it still looks like a next gen title from the detail on each character to the spectacle of your surroundings. Stepping out into the Colosseum for the first time (“Gladiator” style) is a sight to behold. The game is linear however and only gives a few moments of quiet to search for collectable limiting exploration to next to nothing.

The gameplay has been the biggest talking point since the game was first shown. The game has a similar style to the Batman Arkam games. Using a combination of sword slashes and shield bashes to bounce between enemies and keep them off balance while dodging and using your shield to deflect attacks. There are 4 enemy types in the game that require you to approach them all differently, from the basic enemy to the larger types that have unblockable attacks. There are also boss fights but most are just stronger variants of one of the enemy types. You also have a special focus move to turn more difficult fights in you favour.

The QTE executions both add to the gameplay and hurt it at the same time. You receive bonuses after each executions. A choice between health, more experience, extra damage or extra focus energy. The executions are fun to watch but the main problem is that it you are watching. Regardless if you press the right button or time it too late, your opponent will still die. The game lacks any sort of combos to speak of which means you spend your time hitting your enemies as much as possible until you can execute them. There is also only one weapon choice of weapon which is your sword. You have spears which can be thrown in combat but they are used as projectiles more than a proper weapon. The game does retain a degree of difficulty however and can be brutal on higher difficulties but after a few hours you will find yourself wishing the combat had more to offer. Making the executions more difficult to attain, more weapons, adding proper combos and more enemies types would have helped a great deal but as it stands if you don’t like the combat at first very little will change. 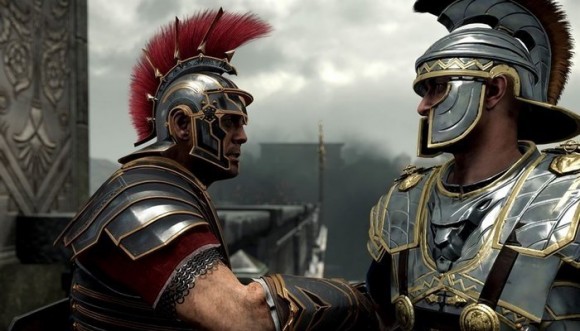 The set pieces in the game are some the best parts of the experience. Positioning your troops to help in one of two ways depending on your choice. Controlling the testudo formation happens a few times without becoming repetitive. There is also a siege section where you are atop a wall defending from ladders, towers and catapults while you command your troops to target different targets. The game also implements the Kinect in a way that improves the gameplay. Allowing you to command your troops to without pressing a button. It works well and lets you focus on the combat.

The mulitplayer of the game gives you control of a gladiator in the Colosseum with a partner. Letting you loose on waves on enemies with different objectives in a variety of environments. You level up in this mode as well and you can purchase random packs to upgrade your gladiator with either coins you earn or micro transactions. Most of this however seem irrelevant in combat despite the stat changes and are mostly revert to cosmetic changes. The mode is fun for the most part if you like the combat and want to play with a friend but does not add anything new, it is more of the same.

Verdict:
Ryse is a beautiful game that shows promise. The story is good and well presented and the multiplayer plus the higher difficulties add length to the 5 hour campaign. The combat however is repetitive and lacks and depth. The QTE executions look great but have no consequence if you get it wrong. With a limited number of enemies and no choice in weapons or combos the game has limited options and linear gameplay. An enjoyable game that is let down by its repetitive combat. Hopefully the franchise continues, possibly exploring other places like Sparta or Troy, and give the developers a chance to improve to combat.