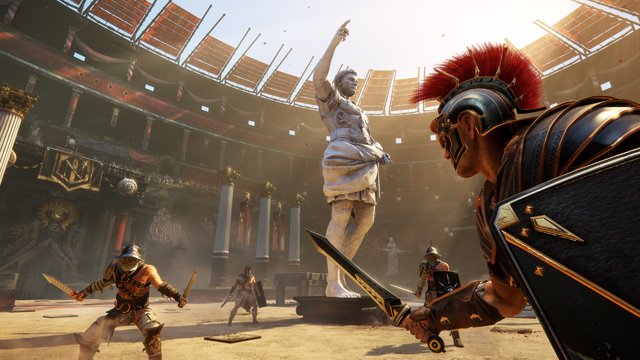 At Microsoft’s E3 press conference this year, Ryse: Son of Rome made a surprise appearance after having not been seen since E3 in 2010. Three years later, the game has gone from first person Kinect controlled combat to third person button fighting.

In a dev diary posted on the Xbox Wire, the flow of combat is explained in detail. In this lengthy post, developer Crytek explains how the combat system works in what termed as “Rhythm and flow.” As stated in the post, ” Flow was important to us, we wanted the player to be able to set up his opponents and viscously plow through them one after another with limited to no beats in between. The better the flow the player can pull off, the higher the rewards. Try a little too hard, go for that one extra hit without banking it in and you could risk losing it all.”

“Timing for moves is crucial to stay alive and perfect timing will be rewarded. For every perfect push, perfect deflect, attack, and execution you perform, Marius will close the distance to enemies faster, and kill quicker” “There are no prescribed combos since all of your moves are available to you at any time, giving you maximum creativity in how you want to dispatch your enemies. You’ll find different combinations of inputs will kill some enemies quickly while the same input on other enemies could get you killed.”

With this system in place, it sounds like Ryse: Son of Rome‘s combat is a little bit like gambling. Do you go for that extra hit and try to gain more rewards or do you bank the rewards that you already have and try to gain some more in a separate combo?

Ryse: Son of Rome is set to be a launch title for the Xbox One when the console releases on November 22.