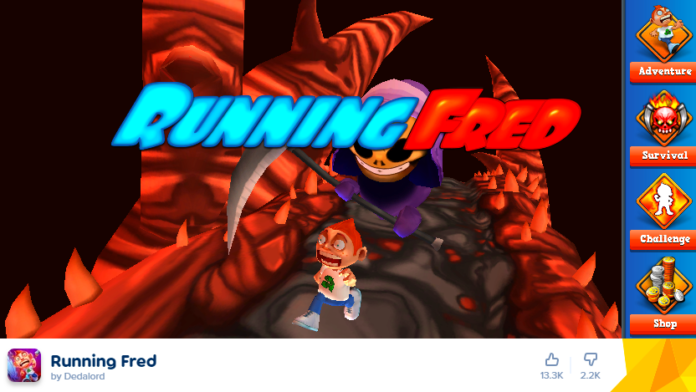 I have finally cleared that gap. Sprinting maniacally, I cackle as I remember the horrible death traps I’m leaving behind. The end is in sight. I can see the gate from here. Just one more spinning mace to get past. I time my approach perfectly, ready myself to slip past the obstacle…and wham. I’m pounded into mulch. No more Fred. I sigh, pick myself up, and swear that this time I’ll make it. This time will be the one. This time, I’ll beat the stage.

Such is the common experience in Argentinian studio Dedalord’s Running Fred. Fred is something of a mascot for the studio, having appeared in several of its titles including Skiing Fred, Falling Fred, and Clicker Fred. As you might surmise from those games, Fred has dabbled in multiple genres in his time. This time, our hero is turning his hand to auto-runners. You can play this game on Poki, and we strongly recommend you do so before you check out this review. 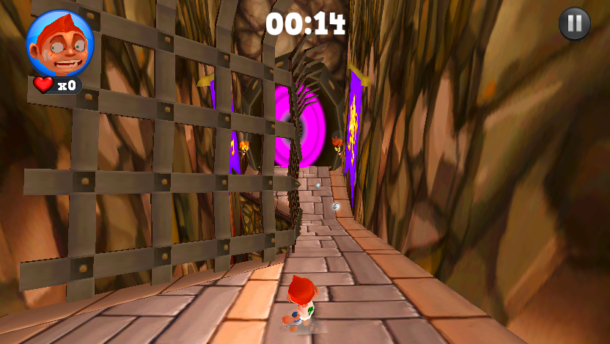 Did you play it? It’s good, isn’t it? Like the previous Fred games before it, Running Fred relies heavily on not only its solid core gameplay but its overwhelming sense of charm to win players over. Fred himself is beautifully animated, all chattering teeth and quivering in fear. The Reaper which chases him has been drawn and painted with surprising care, revealing an interpretation of the character that’s at once ghoulish and cuddly.

It’s no surprise that a Dedalord game has great visuals, especially if you’ve played any of the studio’s titles before. It will therefore also come as no surprise to learn that Running Fred continues the studio’s venerable tradition of putting mechanics first. If you’ve never played a Dedalord game before, we’d wager you’ll be pretty amazed by the sheer breadth and quality on offer here. Running Fred simply feels more complete than many freemium games we’ve played. 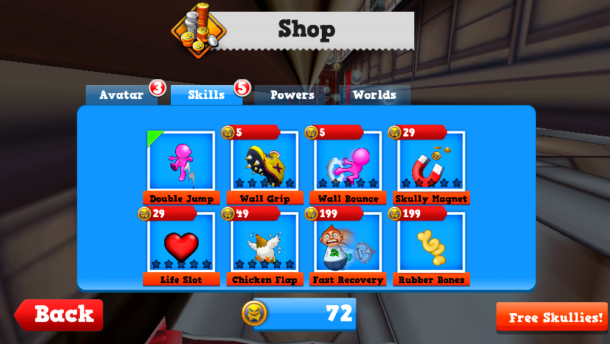 Here’s the lowdown. Running Fred is essentially a level-based auto-runner in which players control Fred as he escapes from “Grimmy”, this game’s version of the Grim Reaper. Levels in Adventure Mode take place across three environments: Grizzly Manor, a Castlevania-style mansion; Danger Caves, a set of spooky caverns; and High Stakes, a temple-style environment. Each level has a number of obstacles for Fred to avoid, as well as gaps to jump, collectibles to gather, and powerups to supercharge Fred’s abilities.

Things in Running Fred start out nicely enough. There’s even a cute little tutorial in which your pursuer Grimmy helps you out by explaining a few of the mechanics. Let it never be said that Grimmy isn’t a fair opponent. Once he’s given you the basics, though, you’re on your own. What follows is a fairly breakneck dash through a number of levels during which one mistake or slip-up could mean the end of Fred’s short and sad life.

If this sounds too difficult, rest assured that Dedalord is a far more skilled developer than that. While hazards and drops can kill Fred instantly if he falls foul of them, there’s usually so much advance warning that players can easily spot and circumvent traps. Each hazard has a particular rhythm which can be observed and exploited; swinging axes can be dodged at just the right time, spinning spike balls can be jumped over, and Fred’s ever-expanding range of moves can take care of the rest. 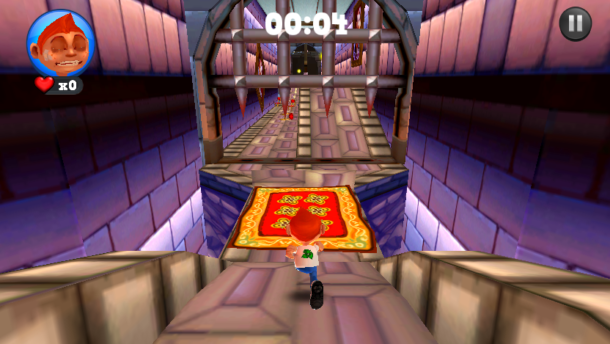 About that expanding range. Running Fred shares some of its DNA with classics like Super Metroid and Castlevania: Symphony of the Night. Don’t worry; this isn’t a lengthy adventure that will take up a lot of your time. Rather, Fred will unlock more movement-based powers as he progresses, allowing him to return to levels and collect things he couldn’t previously reach. This gives the world a bit of connectivity and helps Running Fred to feel like an experience not only worth playing but replaying too.

Perhaps a more apt comparison would be Crash Bandicoot. There’s definitely more than a whiff of the orange marsupial about Running Fred. Maybe it’s the panicked visual style, or maybe it’s the reminiscent level design. Maybe it’s the way Fred unlocks new abilities just like Crash did in Crash Bandicoot: Warped. Whatever it might be, we don’t have a problem with being reminded of one of the PlayStation’s finest hours. 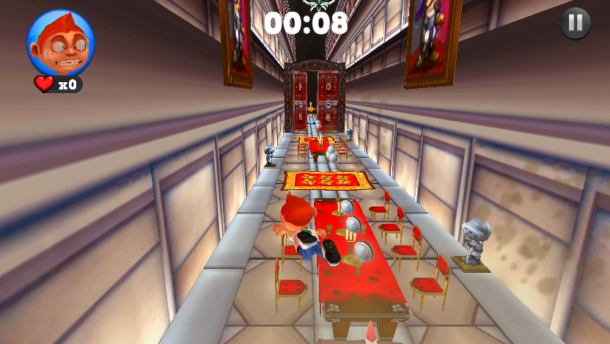 Running Fred manages to remain consistently enjoyable across its run time (no pun intended) and never outstays its welcome, which is impressive. There are a few gameplay modes to play with here in case you need a change of scenery from Adventure mode, and there are also plenty of places to spend your in-game currency. Fred himself can choose from a variety of stylish appearance presets, while levels, powerups, and abilities can also be purchased with the coins Fred collects from each stage.

Every element of Running Fred feeds back into itself. Coins buy more cool stuff, and more cool stuff provides an incentive to go back in and get more coins. This makes it dangerously difficult to stop playing Running Fred. This is a game with smooth core mechanics, a consistent and well-crafted visual style, and a dark, macabre sense of humor that really works in its favor. Fred or alive? We’d choose Fred any day.