Nintendo today announced that the legendary Pokemon Deoxyx is available for owners of Pokemon Black and White 2.

Deoxys may be downloaded to any Nintendo DS system that is connected to the internet via wifi. To unlock the Pokemon, players will also have to ensure that they have 11 or less Wonder Cards synced to their account.

The Deoxys is a special event Pokemon, and is intended to have advantages over normal creatures. As such it will first appear at Level 100 for those who unlock it, and will carry a Life Orb, which increases attack power while reducing overall HP. 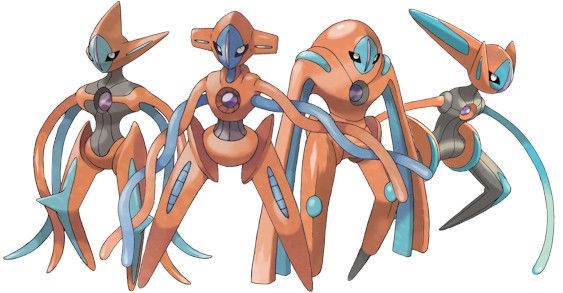 As part of the event, Deoxys will feature the unique moves Psycho Boost and Recover, and will also be able to learn the two moves Nasty Plot and Dark Pulse, something the Pokemon normally wouldn’t be able to do. The passive ability of the Pokemon allows it to drain enemy PP, and it is also able to shift between the Normal, Attack, Defense and Speed Formes in order to optomise its stats for a specific battle.