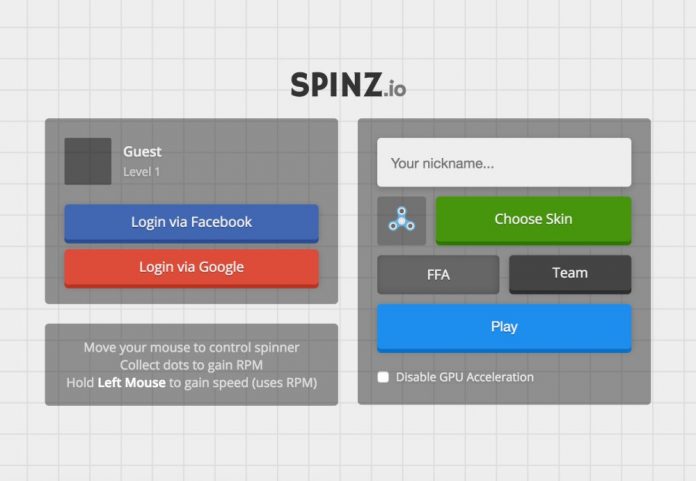 Fidget spinners are taking over the world! If you don’t have at least one, then you’re missing out on the hippest toy of the year. Fidget spinners come in many different colors, shapes, and sizes. Fanatics have amassed collections of the supposedly therapeutic toys. Whether you own several, one, or none, there’s a new way to play with fidget spinners: Spinz.io.

The multiplayer game looks and feels like many other .io titles. If you’ve ever played Brutal.io or Mope.io, then you probably know what to expect. Spinz.io is mostly a free-for-all (FFA), with players seeking to gain power and bash each other out of the arena. But, there are several key aspects that put Spinz.io above the rest of the pack.

RPM
RPM (revolutions per minute) is the most important stat in Spinz.io. That’s because the fastest spinner is the strongest one. In this game, there is no way to grow. Instead, players must glide over colored dots to increase their RPM. If two opposing fidget spinners collide, the one with a higher RPM will win. The other fidget spinner will lose speed. And if it doesn’t have enough RPM, it will disappear from the map. Players live and die by their RPM. 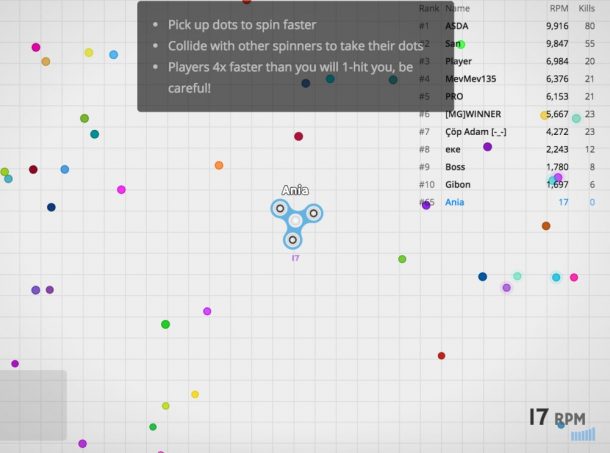 Whirlpools
The arena is littered with colored dots and black holes. The latter, also known as whirlpools, have a magical property: they thrust fidget spinners at lightning-quick speeds. Both strong and weak players can take advantage of the whirlpools. After entering a dizzying portal, it will send you flying out the other side at a dangerous speed. The instant boost is a double-edged sword, because it allows swift attacks while making weaker players more vulnerable. Jetting out of a black hole also makes it easy to collect colored dots. Fast speed equals fast rewards.

Winning Mode
FFA isn’t the only way to play. Spinz.io includes a Team mode, which divides players into two factions: Red and Blue. The two-team gameplay mode is an excellent choice for beginners, because half of the spinners in the arena are your allies. This makes it easier to live longer, since only 50% of other players aim to defeat you (instead of 100%).

One issue with Team mode is the potential imbalance of power. The game is always ongoing, without a definitive ending. So, one team can rise to power and maintain all the top spots on the leaderboard. If those players stay in the game long enough, they become unbeatable. Thus, players that join and are assigned to the opposing (weaker) team will never win. 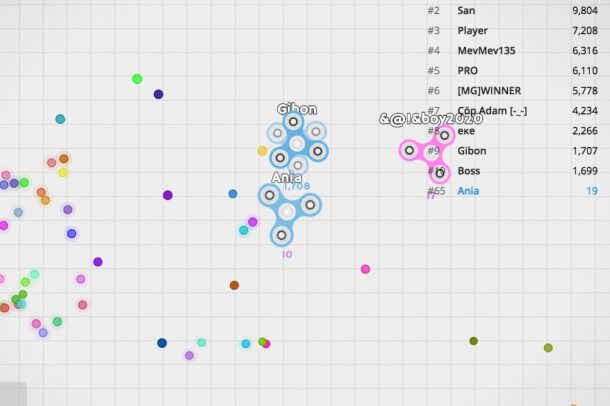 Winning Strategies
Team mode opens the game to many strategies. For instance, being aggressive isn’t necessarily the best way to gain power. New and weaker spinners can tail stronger allies. When their teammate defeats another spinner, the weaker player can pick up the pieces. That’s a quick way to gain RPM. Another winning strategy is the tag-team attack. Two allies can traverse the arena together, battling and defending alongside each other.

Whether in Team or FFA mode, Spinz.io offers a refreshing take on the .io platform.