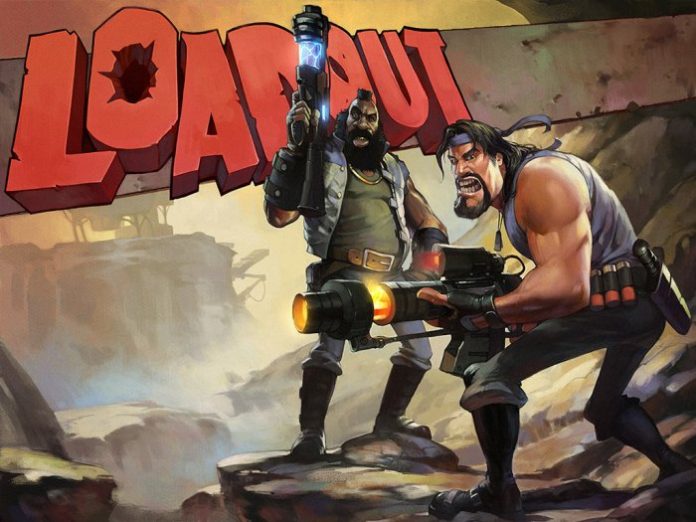 As I maneuver the battlefields of Loadout, and find myself on the outskirts of a point I am supposed to capture for my team, I find myself face to face with one of my foes. Though the sex and proportions of the person controlling this digital avatar remain, mercifully, unknown, there is no ignoring those of their in-game persona.

She’s a large woman wearing a thong that was perhaps purchased with a once smaller waistline, or maybe just with optimistic eyes. Similar theories are harder to draw as it concerns the metallic pasties covering her nipples. They encourage no reasonable ideas of purchasing logic, just as they provide no functional support for her constantly bouncing breasts.

The battle that ensues is an ugly one. We both have decided on a strategy of jumping in the air and wildly circling each other, to the point that an outsider may view the activity as some sort of long lost mating ritual, punctuated by the occasional firing of a flaming missile or electric bullet. For the combatants, little thought is given to accuracy, or for that matter to our rapidly disappearing limbs and ligaments.

Though I’m missing the better part of my head, I do emerge from the battle victorious. As such I have gained the right to claim my opponents weapon (an electric gattling gun dubbed “Your Mother”), but bypass it in favor of my own gun; a three barreled flame assisted rocket launcher by the name of “Pre-Determined Combustion.”

Then I move on.

It’s in no way unusual for a piece of entertainment to serve as a culture touchstone that ends up perfectly representing some aspect of its place and time. However, upon initial glance, you may not consider Loadout to be an example of such an occurrence. Yet I’ve been spending enough time with it recently to conclude that, for better or worse, that’s exactly what it is.

It’s an interesting visualization of popular internet gaming culture as it exists at this moment. Loadout is a place where modesty is sacrificed in favor of the ability to create a persona that, in some way, represents your own bombastic individuality. Sure that’s not always pretty, but there is a lot of obvious heart poured into even the most grotesque and obscene creations.  Like many modern games, it affords you an escape from the social confines of polite society, and affords you a way to explore your creative and daring side with virtually no fear of persecution.

Customization then is at the heart of Loadout, just as individuality within a community of your peers is at the heart of the larger modern online gaming community. That Loadout defers to a usually over the top visualization in all aspects, is also somewhat appropriate for a group that often seems to forgo subtlety in favor of messages and retorts delivered with the aid of an electric shotgun and taunting wiggle of an overweight thong clad butt.

Even the gameplay serves as an interesting representation of modern gaming culture at large. To the outsider or newcomer, it’s a chaotic playpen of immaturity and disorder. Perhaps that’s true.

Like any culture, though, once you absorb yourself entirely in it, you do start to identify a method to all the madness. At the same time, if you want to really become a part of it, you’d have an easier time just submitting to the chaos, rather than dissecting and analyzing everything that it consists of.

The idea of their being any higher calling or long term significance to a game like Loadout is, admittedly, a tough notion to swallow. If it’s too absurd to bestow such a game that legacy, then just consider that it’s incredibly likely that Loadout was developed as an intentional snapshot of a large section of the internet gaming community that so often serve as the representatives of the industry to the rest of the world, whether or not that’s necessarily a good thing.

Loadout was clearly designed as a game that was meant to be turned into memes, YouTube videos, Tumblr posts, Reddit karma grabs, and in general lend material to the masses that populate those and other particular online sections. It’s a game aiming to achieve that illusive idea of viral online marketing, and as such populates its game with as many elements that may help it achieve that.

Gone Home may be the preferred cultural representative for the current batch of high minded gamers who focus primarily on the artistic advancements of the medium, just as The Last of Us might be the more suitable champion of those that believe in the power and potential of Triple A gaming as it stands currently.Yet it’s Loadout that serves as the product of an online gaming culture that may in fact be the black sheep of the community to many, but is a beloved and significant member of the family nonetheless.

It’s actually a highly flawed game that will certainly divide many with it’s randomness and free to play model, but if I were tasked with showing someone a 100 years in the future a game that would best summarize the general online gaming community as it stands at this moment in time, it’s Loadout I’d begrudgingly feature.