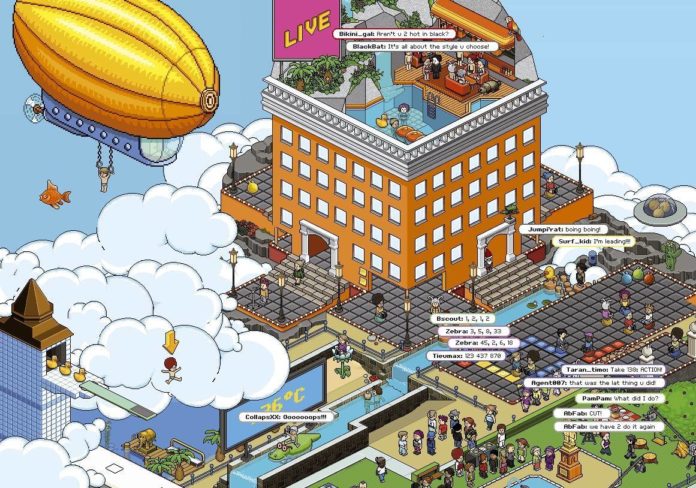 Habbo Hotel is a social game and network mainly for teenagers from 13 years and older. It allows them to meet new people, express themselves and participate in games in a safe environment. The site, which combines the concept of online chat and gaming, is owned and operated by Sulake Corporation, a Finnish company.
Accessible to Finnish users since 2000, Habbo Hotel has since established itself as one of the largest non-violent online community games on the Internet, present in 32 countries with 200 million accounts created and 15 million unique visitors per month (data as of January 2011).

The service was launched under the name Hotelli Kultakala (Hotel of Finland) in August 2000. The company decided early on that another, more neutral name should be used for better identification. The word Habbo was chosen to designate a member, which became the name of the site.
The second Habbo Hotel was launched in the UK in January 2001. Since then, the Habbo Hotel chain has continued to grow: the service has since been extended to more than 32 countries on five continents. However, in August 2007, development difficulties in the Chinese market led to the decision to close the service for that country. This is the first time that a hotel has closed its doors. Users in China were then redirected to the English version of Habbo.
In April 2010, Habbo executives decided to merge all English-language hotels, i.e. the English, American, Canadian, Australian and Singaporean hotels, into a single site: Habbo.com, which then became the English-language hotel. The consequences of this merger were not insignificant, since in the end, Sulake staff members or moderators working for these sites were laid off.
At the beginning of 2011, Sulake announces its intention to go public and also announces the launch of applications for the various touch tablets for the summer of 2011.
At its peak in 2009 Habbo welcomed thousands of visitors simultaneously in each of its hotels. The role play is at the heart of the game, its members dress up, furnish their apartments as they want and get into the skin of a chosen character.
Soon organizations with many members are created at the initiative of the players. Armies and mafias stand against each other, with infiltration as their only weapon. The objective of the members is to be recruited by the targeted organization and to gain the trust of its most prominent members and then obtain the privilege to move furniture in the organization’s apartments. Infiltration can take several months and has the sole purpose of completely disrupting finely furnished rooms and marking its action with the acronym of its own organization.
Other members organize games in their apartments, the fridge game or musical chairs in exchange for prizes. Some even offer to play 21 in their luxury casino. Huge dices are part of the furniture available. And for a few credits, you can try to win a lot or lose a lot of money. Habbo in a sense is the RPG ancestor of today’s online casinos such as the one detailed here, hosting the first online bookmakers and gambling rooms.

Features : On the site

Several activities and features that do not appear in the hotel itself are available on the hotel’s website. These include, but are not limited to:
The Homes pages: Each user has a personal page that they can decorate as they wish to share their world with other users. He can also display his list of friends or apartments thanks to widgets, insert a guestbook, etc.
Groups : Users can create groups of Habbos (from 10 credits upwards) united for the same cause. The owner of the group can create a badge for its members, decorate the group’s page, moderate their own discussion forum, etc.
Forums: Visible on the Community page of the site or accessible via the clans, everyone can take part in a discussion, express their opinion… In order to avoid spam and unwanted messages, it is necessary to confirm the email address of the account in order to post. In addition, Habbo has included a captcha system to limit the frequency of messages.

Features : In the hotel

Private apartments: These are apartments created by the users themselves. They are furnished with Habbo Credits that the owner probably bought, or was offered.
Official Places: These are places, formerly known as “Public Apartments”, that nobody owns. Access is open to all Habbos, with the exception of places reserved for VIP Club members, which are currently used for events or partnerships.
Express Chat: This is a private instant chat where users can talk to their online friends without necessarily being in the same room as them.
Item Barter : Users can meet in barter rooms to exchange rare and rare items they collect.

The site is governed 24 hours a day, 7 days a week, by a team of professional moderators3, who can be reached at any time via numerous reporting buttons. Habbo strives to educate its users on the best way to behave in order to surf safely on Habbo and the Internet. This information is easily accessible to everyone.

In 2011, Habbo, the leading social media for teenagers, is growing every day and is therefore of increasing interest to advertisers. It is not uncommon to come across ads in hotel rooms, or even during the loading time of the rooms. Already with a partnership with the television channel M6, brands such as Sunny Delight, Spiderwick, Tetra Pak (to name but a few) have also invested the site. For the brands, this is a real opportunity to engage in a discussion with teenagers and find out how they feel about their brand or product.
Nevertheless, the abundance of these ads is increasingly criticized by Habbo users, who now see their community more than ever as a marketing product.

Habbo is also a place that allows its users to meet their idols through numerous regularly organized VIP chats. Indeed, hundreds of stars such as Tokio Hotel, The Rasmus, PZK or Pony Pony Run Run have come to meet their audience on Habbo. Unfortunately, only about fifty users can exchange with the artists in the chat room, the others have to be content to watch the latter in “Habbovision”, a kind of television where users can watch what happens live in a room when it is full.