Great news for all the virtual gods out there – Civilization V is in the works at Firaxis games, meaning that soon enough we’ll get a decent fix of Sid Meier’s Civ (including a really tasty Civilization Network I’ve told you about already).

The upcoming Civilization V promises to expand upon the universe of Civ games and make it even more suitable for hardcore players. We’ll see hexagon tiles now, for a deeper strategy, as well as more realistic gameplay and stunning organic landscapes for players to explore as they expand their empire. Also, there’s a new graphics engine coming with the game that seems to go from the cartoonish looks of the past titles to a more lifelike touch – which is always nice! So prepare to see fully animated leaders interacting with players from a screen-filling diplomatic scene and speaking in their native language for the first time – probably making Firaxis the Mel Gibsons of computer gaming.

“Sid Meier’s Civilization franchise has been recognized as one of the greatest PC game franchises of all time with millions of units sold worldwide,” said Christoph Hartmann, president of 2K Games. “Civilization V takes the franchise further by offering players a more immersive experience with deeper strategies; heightened tactical combat; vast, realistic landscapes to explore, battle over and claim as their own; and an in-game community hub where Civ fans can share content and compete against each other without leaving the game. This marks a new era that will forever change the franchise responsible for sleep deprivation and reduced productivity for nearly two decades.”

“Each new version of Civilization presents exciting challenges for our team,” said Sid Meier, director of creative development at Firaxis Games. “Thankfully, ideas on how to bring new and fun experiences to Civ players never seem to stop flowing. From fully animated leaders and realistic landscapes, new combat tactics, expanded diplomacy and shared mods, we’re excited for players to see the new vision our team at Firaxis has brought to the series.”

There’s no release date announced for Civilization V yet, but we’ll let you know as soon as new details pop. Now check out two more screens from the upcoming game: 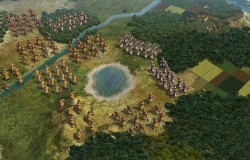