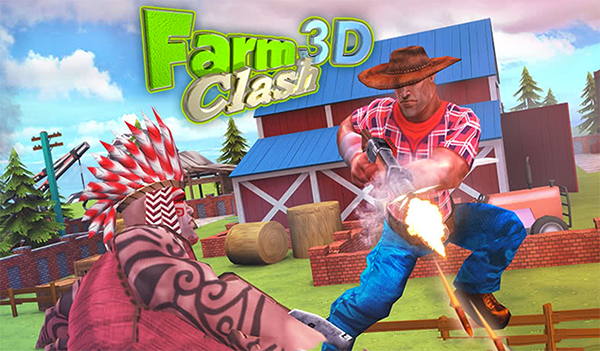 Who doesn’t love playing games with friends? Whether it is a round of Mario Kart or running and gunning around zombies in Call of Duty, cooperative multiplayer and competitive multiplayer games can transform a bland, uninspiring concept into an awesome experience. And, in the era of the battle royale shooter, there are no shortage of games out there for friends to tackle. But what makes a game worth your time?

Not only is it a great game, but it comes in at the all too awesome price of FREE. It runs natively in a web browser and it looks gorgeous while doing so. Rendered in colorful 3D, Farm Clash 3D gives you a variety of ways to battle your opponents and take them out of the arena. Play Farm Clash 3D for free at lagged.com.

One of the biggest problems with games that run natively in web browsers is that they don’t always run smoothly and there can often be a lot of lag or latency. Anyone that has played FPSes knows how important latency can be – especially in a hyper competitive arena game. How does Farm Clash 3D handle this? Amazingly well, in our humble opinion, but don’t just trust us about it because you can see for yourself. Farm Clash 3D is perfectly optimized for a variety of formats, including Windows PC tablets, but it works best in a browser. Here, the character avatars are rendered with blazing fast speed and actions and reactions happen concurrently with little to no latency between your screen and that of other players.

Graphically, Farm Clash 3D is also an impressive game with great 3D graphics and robust sound effects. It is immersive enough without being obtrusive. Again, you will find yourself amazed that this is a browser-based game. That they can pack so much content into such a well-delivered package is amazing.

Controls can be awkward at times, but that is almost part and parcel with browser games. WASD keyboard-style controls might be a remnant of the 1990s FPS, but it is still pretty standard for games in this format.

Neither have we, but the unique setting makes for some hilarious moments. Here, Farm Clash 3D really recalls the classic Nintendo 64 competitive shooters like GoldenEye 007. The emphasis on fun over all other things really comes to the fore when you’re taking on other players in Farm Clash 3D and that makes some of the nagging issues here and there excusable if not forgettable. We rate this game a 9/10 for great graphics and fun game play