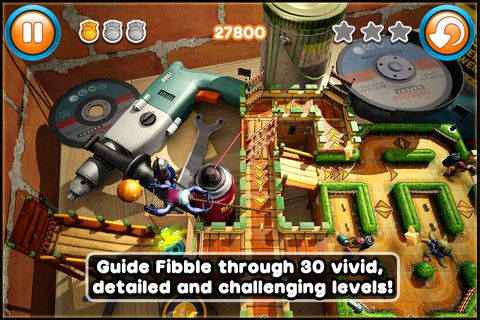 Crytek, the developers of the super-hardcore mainstream title Crysys have surprised everybody by releasing an iPhone and iPad game that has absolutely nothing in common with the first person shooter. Their game, Fibble is a cutesy and very casual puzzle game with cutesy and colorful aliens. And even if it might not seem much to start with, Fibble is actually a very fun game!

Fibble tells the storey of a really small alien that somehow manages to crash-land in a regular earth house, together with his friends who get lost. As you can imagine, you job will be that of finding Fibble’s friends and in order to do so, you will need to complete a bunch of challenges.

The gameplay of Crytek’s Fibble for iOS operating devices reminds us of casual mini-golf games: you will have to touch and drag in order to launch Fibble the alien in the direction you think you must do it, usually at the exact right moment to get help from the other creatures or things along the way. Send Fibble forward at the right time to get help to overcome obstacles, gain speen and go past nasty corners. All in an extremely fun and fast paced game!

Also, since it’s a Crytek game we’re talking about here, we’re also getting a pretty solid visual experience with Fibble, one that I am sure you will enjoy.

So head over to the App Store and get Fibble for iPhone here or Fibble HD for iPad here.