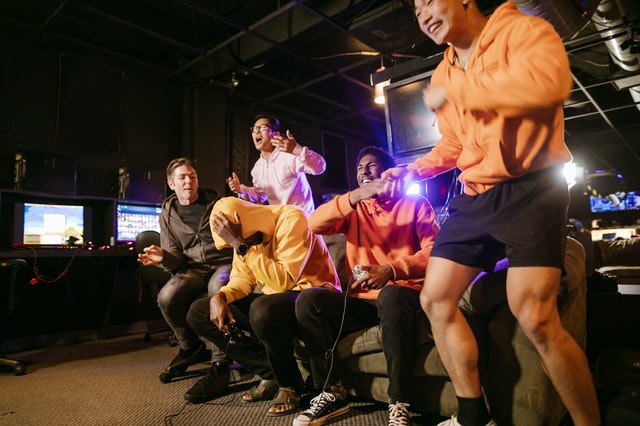 According to a recent survey done by Correlated, 36% of adults like horror, enjoying the frights and thrills that scary movies and games can bring. But the horror genre is something that is generally aimed at the over-18 market. There has been a new trend however, for horror games that are aimed at a much younger audience, with a 12-rating and below. These games are great fun to play whatever age you are, but have become particularly popular with pre-teens who want to give themselves a scare, but without it being too gory.

The Five Nights at Freddy’s (FNAF) franchise, which began in 2014, has become enormously popular. There are now nine games to choose from, and numerous books and graphic novels. The games take place in a run-down family pizza establishment, “Freddy Fazbear’s Pizza.” The player has to negotiate their way through the building, defending themselves against a series of animatronic characters, including or course, Freddy Fazbear. Playing FNAF is a creepy adventure with plenty of jumps and scares. It is the character’s though, that are the key to this franchise’s success. Freddy and his pals are the anti-heroes, the complete opposite of Mincraft’s Alex and Steve. They are artistically imaginative, well-designed, broken and fascinating.

Bendy and the Ink Machine

Bendy and the Ink Machine is a survival horror game that is also a masterclass in storytelling. The original game, released in 2017, was inspired by the Bioshock game series. The game takes place in a fictional animation studio – Joey Drew Studios Inc, which is haunted by a seriously paranormal ink machine. The player takes the role of Henry Stein, an ex-employee that returns after receiving a creepy letter asking him to come back to the studios. He is then challenged to a series of games, puzzles and fights, all intertwined with an intriguing story. The artwork and styling of Bendy and the Ink Machine takes inspiration from the 1930s and 40s, helping to transport you to another world.

Hello Neighbor is a stealth horror game first released in 2016. Set in suburbia, the player becomes Nicky Roth, a boy who is trying to discover the deep, dark secrets of his unusually private neighbor, Mr Peterson. Rather than just asking though, Nicky breaks into his neighbor’s home and does some snooping around, whilst trying not to get caught. The game is played in the first person perspective, making it feel eerily realistic, especially when Mr Peterson comes at you with his giant spade. There are now three more Hello Neighbor prequels and spinoffs, with Hello Neighbor 2 due to be released this year. Seven short novels have also been released by Scholastic Books.


The horror genre isn’t just for adults, there are some great games for the younger generation that are free from blood and guts. That doesn’t make them any less scary though, just be prepared for those classic moments that really make you jump.