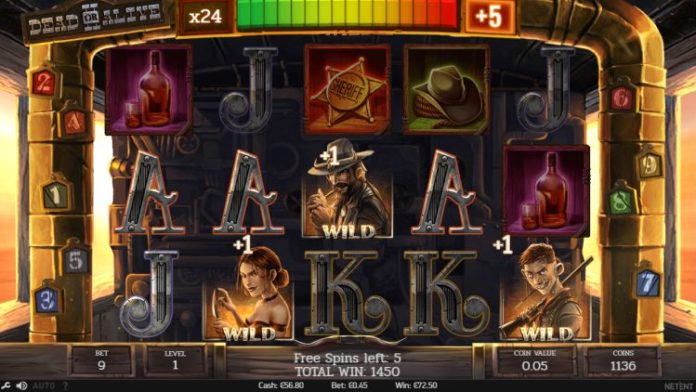 2019 is far from over, and more than 50 new slots are trending on top online casinos. Some of the games boast of VR support while others are proving popular for their regular payout rates. If you also love progressive slots, login to your favourite casinos. New progressive games could be waiting for you. But first, join us as we review new slots buzzing the most in the online casino world.

After a decade-long wait, Netent released a sequel to the ‘Dead or Alive’ video slot April this year. It’s visually stunning and loaded with features meant to magnify your wins and make its gameplay more immersive.

One of the most talked-about features of the new game is its multipliers. If you trigger the game’s latest feature, Train Heist, it initiates a progressive multiplier that could boost your wins up to 100,000X your stake size.

There are numerous stories of people winning hundreds or thousands more their stake sizes, so the game’s payout isn’t an exaggeration. However, more are times when you’ll hit free spins than huge payouts. That’s alright, though. For a 5-reel, 9-pay line game with sticky wilds, generous free spin features and a 96% RTP; it’s worth playing.

Mega Pyramid is the latest slot to join the long list of games themed after ancient Egypt. Designed by Red Tiger Gaming, the game features five reels and 30 paylines. It has an impressive 96.18% RTP and a maximum payout of 5,000 times your stake.

Obviously, it doesn’t come close to the money you could win playing Dead or Alive II. However, it’s a new game on the block and rumours are that it drew inspirations from the hugely famous Book of Ra game. The game ha10 major features, four of which pay exceedingly well. The Egyptian Queen symbol is the most valuable among them.

Being a sticky symbol, the queen remains on the reels longer than all other symbols. And each time she appears, she triggers a specific number of free spins. During that time, the pyramid eye feature can also s appear and clone certain symbols to produce high payouts.

Conan is a freshly released game by Netent. It was inspired by the fictional magazine character, Conan the Barbarian and stays true to its inspiration. The game is centred on a sword twirling Cimmerian warrior out to terrorize his opponents. But if you can help him complete his missions, he will award you regular spins and multiply your bets.

To activate free spins, you need to trigger the shield with the swords symbol on three reels. Other free spins’ features are the walls of Tarantia, city of thieves and the temple of the serpent. You earn up to 50 spins when you match five scatter symbols.

Although the game looks reasonably cartoonish, its wilds and multipliers will keep you hooked. You need the Thoth Amon and the mystery feature to trigger a multiplier of 3-7 times your stake. However, initiating the tower or Battle wilds can also help you win.

The ultimate symbol, though, is the Conan feature which could multiply your bet for a maximum of 2,016 times. To play Conan and other top slots, join a casino that supports Netent’s best online slots.

After Narcos’ tremendous success on Netflix, Netent acquired a license to turn the TV show into a slot game. And if the game’s popularity is anything to go by, people love it. And why shouldn’t they? The game lets you win in 243 ways, adjustable coin sizes and a random jackpot worth 300 coins.

The game features all the iconic stars in the TV show, including the kingpin Pablo Escobar. The slot’s symbols are everything you would expect: guns, money and drive-by features. Don’t expect to witness the same violence featured in the TV show. It’s toned down to focus on gameplay.

Nonetheless, Narcos is proving to be a cult classic with players less than a year since its launch. It features a decent 96.23% RTP and a host of in-game features meant to help increase your wins or game time.

Look out for the drive-by feature as it triggers wilds that could lead to a win. If Escobar appears while holding a mug shot; he initiates a bonus round that awards you instant coins and free spins. The spins produce locked cases which pop up to reveal free coins, multipliers or more spins.

Bonanza is the most successful Megaways game so far. It is professionally crafted with impressive graphics. Also, it features a woodland setting with a beautiful cottage and water wheel in the background. Spell out the word ‘GOLD’ and Bonanza awards you 12 free spins.

Being a Megaways game, you have 117,649 ways to triggers wins in the game. The game features six reels that fit in up to seven symbols. Some of the symbols explode and are immediately replaced by more symbols, forming a never-ending sequence.

Ever since Book of Ra became a casino hit, Novomatic has been trying all ways to keep people playing the game. Earlier this year, the software developer released two sequels to the game: Deluxe and Book of Ra 6.

Book of Ra Deluxe features 10 paylines, one more than the original. It also features free games and expanding lines, so it’s worth the hype. It features reasonably attractive graphics and plenty of elements from its predecessor.

For instance, Deluxe is as volatile as the original game. That means there are times when it pays out regularly, and times it can be dry. On your lucky day, you could win up to 500,000 coins from the game.

After some renowned software developers promised to release incredible slots this year, they haven’t disappointed. From Narcos to Book of Ra Deluxe, Dead or Alive II to Bonanza; all the games people expected to impress turned out to be worth the wait.