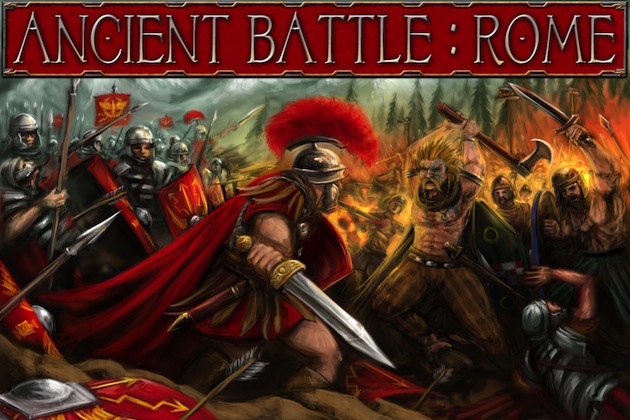 Last Thursday, developer Hunted Cow Studios released their latest games, Ancient Battle: Rome is a turn-based strategy game with the feel of the early Age of Empires games and the game play of a complex game of chess. With historically accurate story-lines, this game is perfect for history fans and strategy gamers alike.

Ancient Battle: Rome is a pretty straight forward game. The player is presented with a game area with hexagons as spaces. The player moves their units across the board trying to achieve the goals the game gives them. There are a decent number of units, from light infantry and archers to heavy armored cavalry and catapults. The game also has a unit based on the general that historically fought in the battle, which is a cool easter egg. The goals Ancient Battle: Rome are pretty similar through out gameplay. Players have to destroy X percent of the enemy while keeping X percent of their army alive. While there is some variation, most of the goals are the same, making gameplay very easy. The campaign consists of 4 main ancient territories with 16 missions per territories. The cool thing about this game is that half the levels in this game you can play as the people Rome fought against as well as Rome. The campaign map shows more territories, so I hope that Hunted Cow decides to add more levels.

While this game is entertaining, there are some issues with it. I feel like the campaign is very rushed. I felt like I didn’t get a great overview of the units and how they move in different terrain, something I had to find out myself. The difficultly level seems very off. I’m currently playing causal for my first play-through. Sometimes the game is too easy, while other times the enemy seems too difficult for a causal difficulty. Like I previously mentioned, there are only 4 main levels, half of which you have to buy through in-app purchases. Hopefully, they will release more levels you don’t have to pay for.

With the difficulties this game gave me, I’m giving it 4 stars. If there wasn’t the fact you had to pay for half the levels, this game would get a better rating. However, I really feel like history buffs and gamers alike will love this game. Ancient Battle: Rome is currently an introductory price of $1.99 USD with in-app purchases both costing $.99 USD.