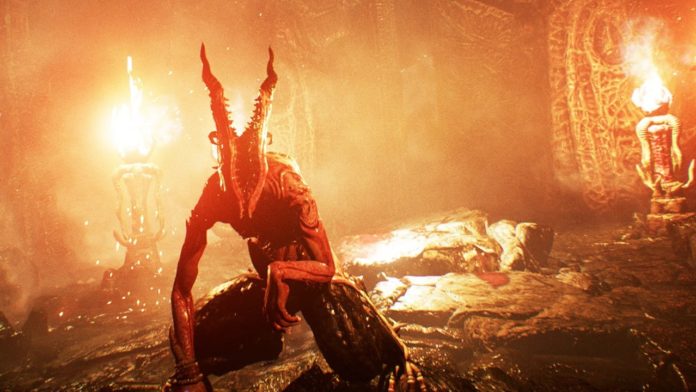 “I fall into the blackest place, where light causes pain, and darkness brings solace. Into a place which deprives one of faith and erases memories, which leads to madness and effaces the boundary between people and animals…”

Before we even jumped into Agony ourselves, we heard all about the ruckus it was causing in the indie game scene. Agony is a dark and merciless adventure through the fiery depths of Hell itself, and as one can expect is full of grotesque imagery – so much that the game had to actually be toned down to avoid an “Adults Only” rating from the ESRB.

Naturally, as the game decided to tone itself down, many fans were outraged at the decision to censor the game. Let us tell you right now though: censor or no censor, Agony loses itself right out the gates and does not really seem to ever find a focus. 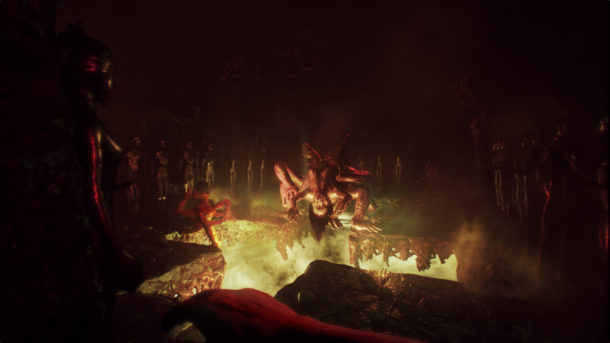 At its core Agony is a survival horror game similar to games like Amnesia. You play as a decrepit old man who has no means of defending himself. You start off at the bottom most level of Hell, and your only lead of escaping back to the mortal realm is the mysterious “Red Goddess”.

Well, you are in Hell, so sunshine and flowers are obviously out of the picture. Agony’s best and probably most notable feature is its environmental design. Dark corridors made out of pulsating flesh, moans of nearby tormented souls who are barely clinging to life, and the low menacing growls of nearby demons hunting you… Agony nails the atmosphere of Hell pretty well.

But, unfortunately, it is exactly this locale that emphasizes one of the game’s core problems: Agony is dark – so dark to the point that not even upping the gamma will help you see. Couple this with muddy textures and environments that just kind of blend together and you get unfocused players who have no idea where to go. 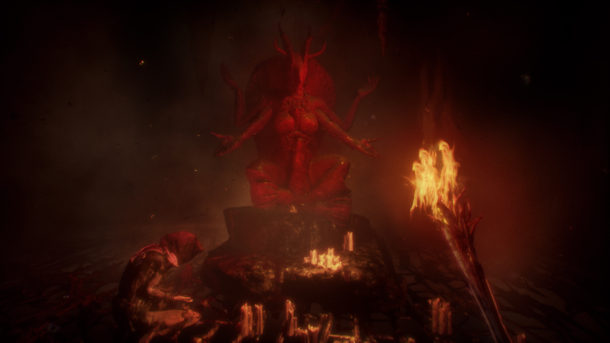 Which is sad, because Hell being, you know, HELL and all, you would expect this. The style is there but the execution is a bit lacking. What proves this point even further is that there is ability that lets you send out a little orb of light that shows you the direction to your next objective.

The worst part is that we just became kind of numb to it, which we think will happen to many players. At first we were shocked and disturbed by the people impaled on spears, the severed limbs strewn about everywhere… but, again, after a while it just all blends together and the shock value just fades away.

And sadly the gameplay only reinforces the unfocused nature of the game. While you are trying to figure out where to go next, you will eventually run into hostile demons. As we mentioned, there is no way to fight back so you have to either run or hide. However, the stealth mechanics were somewhat unreliable. You can hold down a button to hold your breath which makes you quieter, but then your vision gets this really blinding red hue that makes it sort of hard to see on top of the already hard to navigate environments. 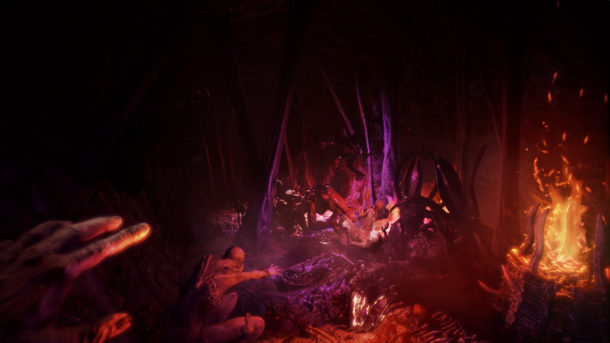 Sometimes we were detected even while holding our breath, and we are not sure if there are other factors into detection like light or vision. At some point you WILL die since almost any attack is fatal, at which point your spirit flies out of your current body.

There are other broken souls wandering Hell, and if you do meet your end you can actually possess them to get back on track. While this could have been used for some interesting mechanics – you actually get to possess the same demons that hunt you later on – nothing really comes out of this mechanic, considering there is not real “fighting” system.

If you are not avoiding demons, then you are probably solving puzzles that barely count as puzzles. Sometimes you will need to paint blood on an unfinished sigil, and all there is to this is finding the correct sigil somewhere. Other times you will need to collect hearts and other body parts to place on switches and scales. This pretty basic stuff and the puzzles do not ever really evolve past this.

The story is fairly interesting, as notes written in blood indirectly tell the tale. The ending is pretty cool if a bit expected, and apparently there are multiple endings from the new unlocked extra modes, but it was too much of a slog to go through the game again.

Agony does a great job at recreating the look of Hell, but with gameplay that features half-baked stealth and puzzle elements, there is a clear “style over substance” message here.