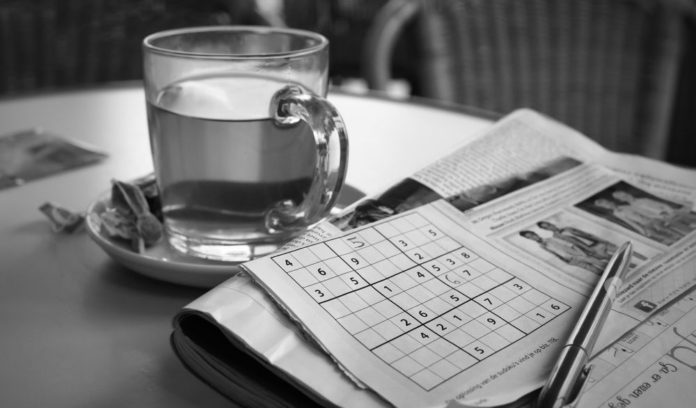 Killer Sudoku is a variation of Sudoku in which you also have to enter numbers that add up to the number recorded at the top left corner of a geometrical shape.  If you thought that understanding all the nuances of a bitcoin casino online or the vicissitudes of bitcoin casino legalities was hard, wait until you try a killer Killer Sudoku game.

Starting Out as Usual

The rules of regular Sudoku all apply:

Killer Sudoku adds a major wrinkle that takes even the most difficult regular Sudoku into heretofore unexplored territory.  If you’ve had enough of exploding gun games, games that take you on a wild ride through a virtual city, or games that are all gimmickry and gadgetry but retread the same old themes, then give Killer Sudoku a whirl.  It will serve as a great alternative game to the ones you like to play now and, for some it will become their default game.

The wrinkle is that mentioned above: the game adds shapes and all the digits in that shapes must add up to the number that defines the shape.

Sometimes we combine two main boxes to get to 90 and find a missing digit that way.  We have also used adjacent columns or rows to also add the 90 and enable us to reveal a hidden number.

Solving: Step 2
We like to print a Killer Sudoku game so we can write our notes on it.  Whenever we find a pair or other shape that has only one possible solution of numbers without yet addressing the numbers’ placement in the shape, we put a dot in the boxes.  That often tells us that we know which numbers go in a row or column.

Since process of elimination is a big method of solving Sudokus, this helps us eliminate many possibilities.

In the most complex Killer Sudokus, the combinations within a primary box may have only one unique solution even if the shapes taken individually may have multiple solutions.  The reason for this is that all major boxes, rows, and columns must add up to 45 with no duplication of numbers.

Solving: Step 3
The more complex searches begin now.  We take any numbers we have revealed and try to find where the same number must appear in a row or column.  We assume you know all of the basic methods of solving regular Sudoku.  In Killer Sudoku, you often find a missing digit by eliminating it from the box that its shape straddles.

Hazards
There are many logical hazards embedded in a challenging Sudoku.  It is common to make an improper assumption based on faulty analysis.  If, for example, you have two or more shapes that occupy two lines.  These shapes may add up to 45 but that doesn’t mean that they must have all the digits from 1-9.  That’s because numbers can repeat in adjacent rows, just not within a row, column, or box.

It may not be considered a true hazard but it’s easy to forget all of the logical implications inherent in the addition of shapes with sums that must also be solved.  Some players forget to apply the basic rules of Sudoku as they are so intent on solving the mysteries of the shapes.

Looking, Looking, Looking as a Form of Play
Playing Killer Sudoku often involves finding a single well-hidden number and from that point on, the game pretty much solves itself.  Finding the hidden digit could take a long time.  The game demands patience and an inquisitive nature.  It is truly the antithesis of the shoot ‘em up games we see all the time.

Sudoku requires no quick movements, no eye hand coordination.  But it offers a satisfaction that we feel many gamers lack when they play a surfeit of action games.  As much as we like action games ourselves, we also love the intellectual challenge of solving a really difficult problem such as Killer Sudoku offers.