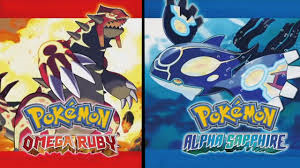 Pokémon has secured its biggest UK launch as Call of Duty: Advanced Warfare returns to the top of the chart.

Pokémon Omega Ruby came out on top between it and Alpha Sapphire, beating its sister game by 2,400 units as they enter the chart in sixth and seventh and eighth position, respectively. Despite not reaching the heights of previous games X and Y in their first week (third and fourth, respectively), Ruby and Sapphire beat their total sales by 17%.

The combined sales of these two would have seen them chart in third place, but manage to beat Pokémon Black and White to become the biggest launch for a Pokémon game in the UK, according to Chart Track.

Call of Duty: Advanced Warfare retakes first place in the chart thanks to Black Friday deals, which saw 67% of its sales come from the old gen consoles. It was helped so much by these deals it now holds the record for highest game sales during a Black Friday sales week.

FIFA 15 is another game which benefits from good Black Friday sales, climbing up to second place, beating out GTA V in third by a mere 1,500 units.

Far Cry 4 drops down two places to fourth, holding off competition from another Ubisoft game, Assassin’s Creed: Unity, which gains a sales boost through console bundles.

A massive winner this week is Driveclub, which thanks to PS4 console bundles during Black Friday, sees its sales go up by a whopping 999%, soaring up the chart from 33rd to eighth.

Along with Unity, the Xbox One console bundles have helped predecessor Assassin’s Creed IV: Black Flag back up the charts as it rises nine places to ninth in the chart.

The Top 10 is rounded off this week by Minecraft: Xbox Edition, helped by the release of the Xbox One Edition.

Elsewhere in the charts, Super Smash Bros. rises from 27th to 13th with the release of the Wii U version, which also includes sales on the 3DS. A new entry into the chart is LittleBigPlanet 3, which debuts in the chart at 18th.

Other games that got a good boost from Black Friday deals were Middle-earth: Shadow of Mordor in 11th and Disney Infinity 2.0 in 14th.

Next week sees The Crew get released, and should get a Top 10 place. Given its strong fan base, it will also be interesting to see how well Kingdom Hearts HD 2.5 Remix on PS3 performs next week.