My, oh my! Zynga is quickly recovering after the Scamville scandal and they’re introducing a bunch of new great farm decorations for Farmville: Alien decorations composed of six different types of crop circles, a crashed UFO (ROS-1947) and even a new limited edition animal, an alien cow known as Bov1ne-9. Cool!

The announcement was made briefly by Zynga who said: “We all know that milk does a body good, right? Now, can you imagine the effects of Milktonium? The FarmVille market has been invaded by some items that are truly out of this world, including a crashed UFO, crop circles, and a visitor named BOV1NE-9.”

If you click the image in the upper left corner, you’ll be able to see two green alien cows and two of the recently introduced alien circles in my Farmville farm (the UFOs scared the crap out of my elephants!), and if you don’t have that much space to place the alien cows, it’s worth noting that you CAN place them in any dairy farm you might have. However, this way you might never find out how much you’ll get for the Milktonium!

Nicely enough, both the alien cow as well as some of the alien circles can be purchased for regular coins (the BOV1NE-9 costs 2,400 coins while the circles’ price range from 4,000 to 10,000 coins). However, the cool crashed UFO costs 30 Farmville Cash, while two of the crop circles – 20. Still, it’s a lot of goodies we can add to our Farmville farm using regular money, but only for a limited time (5 days at the moment of writing). Here are the new “products”: 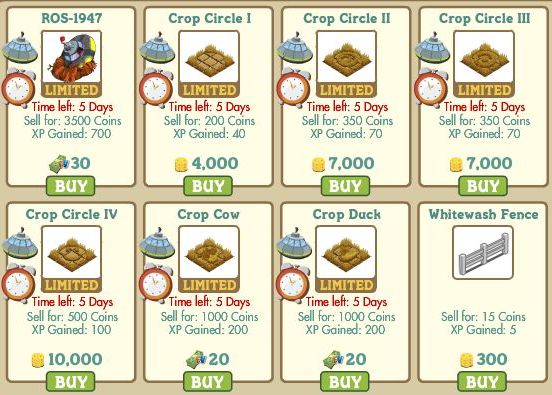 So if you want to add an even spookier and sci-fi touch to your farm, get yourself some cool Alien Decorations!

Special offer: A complete FarmVille guide can be purchased right now fur just $27. It would certainly put an end to all your problems. Click the link to check it out!