Tomb Raider is already considered one of the best adventure-action games ever made by many mainstream gaming media sites, for example Forbes.com has rated this title 9/10. Unigamesity has also given a very positive score to Square Enix’s Tomb Rider, 4/5, and it has been referred as “the best entry in the series”. The new remake is mostly known for its true action features and thrilling gameplay. During the whole journey, players face innumerous frightening situations, from bridges falling apart to stair steps breaking up, but which moments were the most terrifying?

10. Hiding from the Russian Guy

At the first missions, when you discover you’re totally not alone in the island, you’ll get captured by Russian soldiers. Eventually, you’ll end up hiding in a wood cabin, hoping that no one realizes you’re there. However, when things seem to be safe, the Russian leader shows up and catches Lara.

The fight isn’t actually scary, the circumstance of the wolf’s appearance is. Lara enters a dark cave searching for Roth’s pack; when she picks up the lost goods and prepares to leave the cave, a black wolf will brutally engage her in a bloody fight. 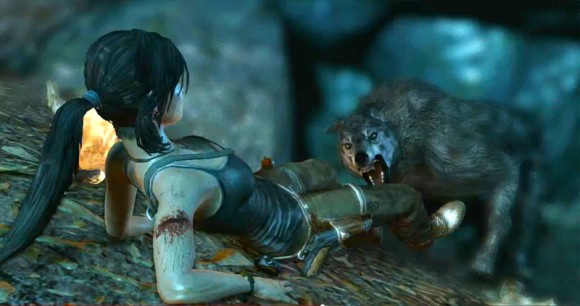 8. Cannibals at the Gas Caverns

While approaching the captive cannibals in the gas caverns, you’ll earn a creepy voice speaking to Lara, announcing that her presence has been spotted and that she’ll be eaten soon. The dark and gross scene boosts the moment.

Lara will get captured by the guardian creatures with the intent to serve as fresh food later on; while trying to escape from the horrific place, wooden structures will start to breakdown and Lara will be having hard times going through the crumbling building – it’s the supposed wind rage of Himiko.

After activating the SOS message at the radio tower, Lara will make a fire signal for a plane that is passing nearby. Sadly at that point of the story, none of them knew about Himiko’s power and how it would affect any structure that attempts to approach the island. The plane won’t succeed at landing and it will virulently crash at Lara’s location. 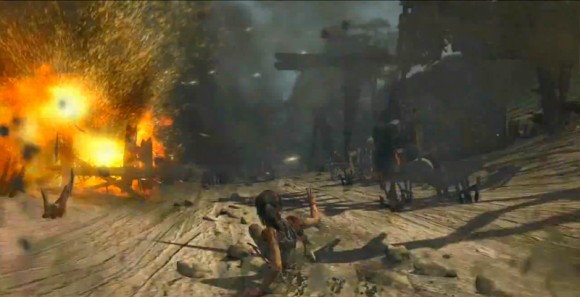 After defeating mother nature’s power (river’s force), Lara has to learn how to fly in a parachute and dodge tree branches in order to survive, landing will be a thrilling problem as well.

4. Crossing the River and Successive Fall

After escaping the guardian, Lara will get in deep trouble again. This time wild waters will take her body into a river’s path. In the process Lara has to evade wooden objects that can mortality wound her.

A crazy enemy decides to use a machine gun to shoot a fragile wood suspension, ending up breaking most of the support cords in the Shanty Town. Lara keeps falling down; cheating death is a great challenge in this mission.

As the whole building burns, after blowing off the gas caves, Lara has to rush out before there’s simply no floor left to step on. In her way out, she has to defeat several opponents and avoid getting burnt, as obvious.

Close to the game’s ending, you’ll face a very strong snow storm that will extremely reduce your visibility in game and things will randomly fall from the mountain’s peak. The sensation that something is about to hit Lara is imminent. But don’t worry if you climb firmly, you’ll be just fine.