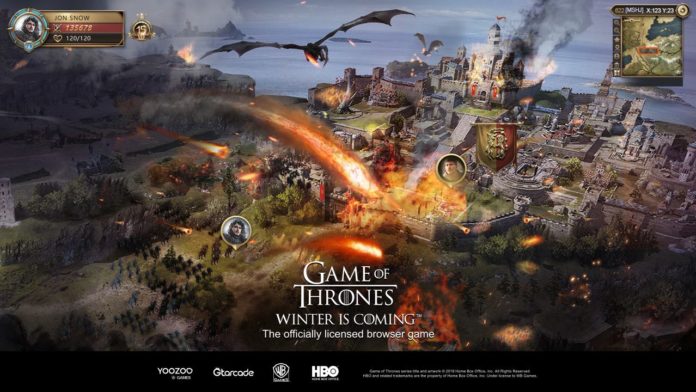 Many diehard Game of Thrones fans have spent a good amount of time reading recaps, complaints and reviews online. They also spend more hours watching videos of fan theories, dissection and making speculations about which turn the final season will take. If you’re one of these diehard fans then you must have probably seen an advertisement for the officially licensed Game of Thrones free browser game. To play this, we’ve used Brave browser to play it. Follow the next link to read a great brave browser review.

The series joined the list of browser games with the Game of Thrones Winter is Coming developed by China-based Yoozoo Games. The game is a real-time strategy game made for PC browsers and officially licensed by Warner Bros Interactive Entertainment with license from HBO.

The Game of Thrones Winter is Coming starts after the death of Eddard Stark and players are to emerge as a new Westeros Lord or lady in his stead. The players get to build a base, recruit followers, and train an army. With every progress they make, they will need to acquire might, money and influence to win the Iron Throne. In this game, the players are also allowed to raise an army and compete with their other human opponents.

The game tries to feature the pleasant GoT music that plays whenever you click on anything and it also incorporates a bunch of familiar faces.

The game has several modes and it is very possible to experience moments from the TV show from some of the modes. You also get to see unlockable exclusive stroylines through a host of PvE (Player versus Enemy) missions. Players are pitted against hordes of roaming bandits and assassins in order to earn valuable rewards.

Well, it gets interesting as various characters from Games of Thrones see present in the game with their original skills, followers and soldiers and the Players make alliances with them to support their ambitions.

You’ll probably spend your first hour in the game exploring as the game tries to teach you the basics. You can place and upgrade buildings by clicking them when you click again, the process speeds up. The same applies to farms and barracks and mines, hospitals, towers and tents are also not left out. You click them first to build, then click again to speed up, and then another click to upgrade and yet another to speed up the upgrades.

You’re also required to claim your rewards by clicking on the list of rewards and also clicking the claim button for each.

There’s combat in the game that doesn’t require clicking but keypresses which activates your heroes’ powers.

The officially licensed browser game has a pretty appearance. The game does not fail to get you to spend money on stuff by purchasing diamonds with which you can buy gifts and speed up waiting times for upgrades and take other shortcuts.

The game is quite interesting because it shows Jaime Lannister on a loading screen and sometimes, you get to hear a line of audio from Sophie Turner that has been clipped from the show.