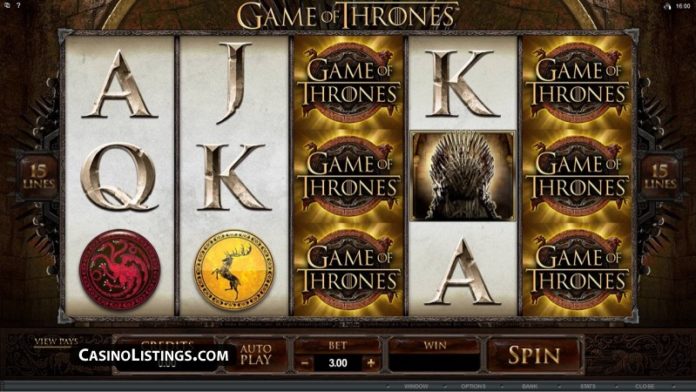 The online gambling market is continuing to grow at a phenomenal rate both in the United Kingdom and worldwide. Online slots are the games that are really powering the growth of online gambling and because of that more and more games are been released on a daily basis.

With so much competition in the market you might think it’s easy to find the right game for you, but it can be tricky. For every great slot game there are hundreds of poorly made, unprofitable ones. Fortunately for you we’ve trawled through the best slot sites to bring you our ultimate list of must-play slots for 2019.

After two years of waiting fans of HBO show Game of Thrones were finally rewarded for their patience by the release of season eight of the show. Although online reviews of the season have been mixed the blockbuster show has still managed to breach one billion viewers worldwide.

The popularity of the show led slot developer Microgaming to produce their own Westerosi-themed slot game which is pretty darn good. The biggest attraction to players of this slot game is the attention to detail as the slot is officially licensed by Game of Thrones.

All of the great houses of Westeros are featured and as you would expect the big bucks lie with house Lanister. Along with a 95% return to player there are a number of free spin bonus rounds to keep you interested and help boost your cash reserves.

(After 7 seasons of blood, sweat and more blood Game of Thrones has finally reached its end point.)

Such is the expanse, depth and inaccessibility of the ocean is that humans have a deeper knowledge of space and have explored it more than the deep blue ocean. As you delve deeper into the ocean you find grotesque, bizarre and peculiar looking creatures that could have stepped off the set of any sci-fi film.

Luminous Life by Playtech have chosen the deep, unexplored regions of the ocean as the theme to their fantastic slot game. All of the icons in this slot game are modelled on creatures of the deep sea and Playtech have spared no expense in making them as visually appealing as possible.

One of our biggest gripes about online slot games is poor graphics, something which defines a large amount of new releases. Graphics-wise Luminous Life is probably one of the best slot games available on the internet right now.

In 1984 viewers around the world collectively closed their eyes with fear as Wes Craven’s character Freddy Krueger hit the silver screen. One of the world’s most notorious horror characters has now made his move to slot games.

In recent years 888 have funnelled huge amounts of money into their own slot development company and this slot is one of the fruits of their labour. The layout of the game stays true to the feel and vibe of the original eighties film.

The musical score that accompanies the slot is anxiety provoking and will raise your endorphin levels whilst you play. If you’re looking to send your endorphins through the roof then you can with two (yes two) progressive jackpots that can make you very wealthy in seconds.

Alongside that the Nightmare on Elm Street boasts a generous RTP as well as regular free spin bonuses.

(The theme track to Nightmare on Elm Street is enough to get the hairs on the back of your neck up.)

In 1994 Virtua Fighter was launched on the Sega Saturn and to this day it remains the most popular game ever released by the Japanese company. The button bashing game has been a classic hit for almost three decades and now you can win money from playing Virtua Fighter.

Playtech have approached the development of this game with the same dedication that they put into Luminous Life. Every single aspect of the Virtua Fighter slot has been designed to closely mimick the original game giving the player an authentic experience.

The wildcard symbol is the Virtua Figther logo and allows players to win up to 10,000 coins at any time. In addition to that there are a number of bonuses and features including an appealing gamble feature that lets you go double or nothing on your winnings.

The Game of Life: Career Day

(Made some puzzling life decisions so far? Rectify past mistakes in this Game of Life slot game.)

If you’re unfamiliar with The Game of Life it is the enormously popular board game that was first released in 1860 by Milton Bradley. The board game sees players live out a life in which they have to cope with childhood, college, work and relationships.

It may sound mundane but it has maintained its popularity for over a century and a half. Numerous versions of the game have been released along with video games and TV show depictions.

Scientific Games had enormous success with their first Game of Life game and have thus released this sequel. Unlike the original slot this newer release has been licensed by Game of Life owners Hasbro.

As such the graphics and gameplay are far better. RTP, bonuses and prizes are fairly average by industry standards. However this is one of the few slot machines that actively engages as it closely follows the gameplay of the original board game.