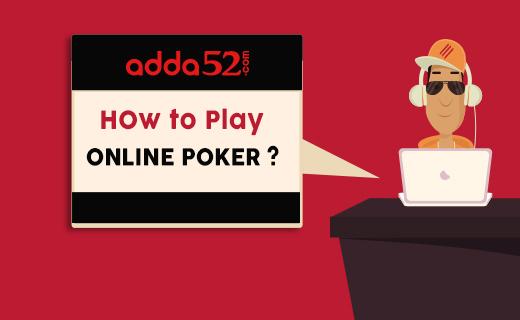 No Limit is the most popular format of Texas Hold’em poker game all across the globe. Most live poker rooms and online gaming platforms offer the games primarily in No Limit format. Moreover, all top events in major international poker tournaments such as DPT ( Deltin Poker Tournament by adda52 ) WSOP, WPT, EPT, etc are played in this format only.

The reason – There is no maximum betting limit and you can bet any amount of chips anytime that you have in your stack at the table. The minimum bet is the amount of bet/raise made by the player who acted before your turn.

Texas Hold’em can be played with two to seven players with one deck of cards. When the game begins, every player receives two cards (hole cards) which are not visible to others. Five cards are dealt face up on the table (community cards) in 3 stages of betting. The objective of the game is to create the best possible 5-card combination using the hole cards and community cards as per the hand ranking rules. It is up to the player to use both, one or none of the hole cards to form the best hand.

The game has 4 betting rounds – Preflop, Flop, Turn and River. This is an exact order in which game continues.

The preflop round is where the first round of betting takes place. The player sitting left to the dealer posts a forced bet (small blind) in order to initiate the betting. The player left to him posts the big blind.

After the blinds are posted, the dealer distributes hole cards to everyone. The betting begins clockwise and the player sitting next to the BB player makes his move. He can call, which means putting in the big blind, he can raise i.e putting in more money than the big blind, or he can fold which is throwing his cards away and leave the hand. Next players also have similar options to act on their turn. The betting round ends when either every player puts equal money in the pot or everyone folds.

From here, the second round of betting begins. The dealer reveals 3 cards on the table. The player who posted the Small Blind( SB) in the previous round acts first. He can check i.e not betting anything, bet i.e putting in money which other players have to match, or fold i.e throw away his cards. The player next to him acts as per the strength of his cards and the round continues the same way as the last round.

The fourth community card is placed on the table face-up and the betting continues.

Once the betting is over, the remaining players reveal their hands (Showdown). The player with the best 5-card hand wins the pot.

One of the best ways to become successful in a Texas Hold’em poker game is to know which starting hand to play and which to fold. Although there is no doubt that your ability to read people, calculate odds, and take quick decisions helps you gather valuable information to beat your opponents, it is also true that the strength of the starting hands plays the key role in determining your possibility of winning the pot.

Top 3 most powerful starting hands are as follows :

The best possible starting hand. Although not invincible, stats prove that the success rate of pocket aces to win is more than 80 percent. It is crucial to bet always with caution with this hand as you cannot deny the possibility of your opponent holding another pair of aces. Don’t slowplay. The more the opponents, the more the possibility of winning with pocket aces decreases. The best way to play with pocket aces is raising/re-raising aggressively to make maximum opponents fold before the flop.

The second best poker hand. The flow – it can be defeated with pocket aces. The best strategy to play with pocket kings is making a big raise pre-flop as it will make players with weak hands fold their cards, and the player with ace card call. You can determine the strength of your opponents’ hand and create strategies accordingly. If the flop reveals an Ace, your can make a continuation bet if you have raised preflop. If you again get called, there is a high possibility that your opponent is holding an Ace. If there is no Ace at the flop, bet/raise aggressively to scare away maximum opponents.

A premium hand. It can be beaten by kings and aces, but they will always beat jacks and lower cards. If you face aggressive bet/raise pre-flop, it is an indication that someone is holding either aces or kings. If you raise and your opponent re-raise, your next move must be based on your understanding of your opponent’s playing style (Tight or loose). If he is a tight player, you can assume that he is really holding a strong hand. If he plays loose, you can assume that his hand is not as good as he is implying.

Your action must always be based on your position at the table. Remember that even if you are holding the strongest starting hand, never get too attached with it and fold it immediately whenever you find that odds are not in your favor.