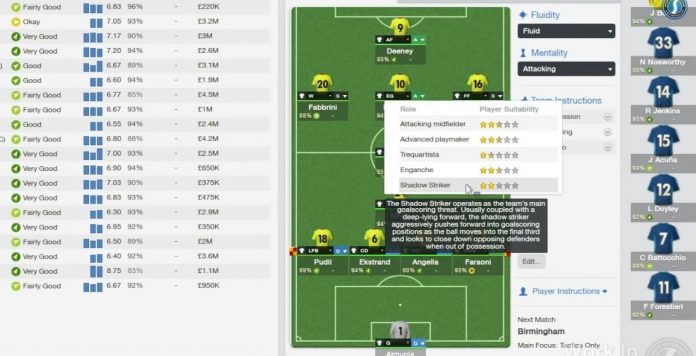 One of the biggest surprises this year following the announcement of Football Manager 2014 was the tactical screen revamp which basically says goodbye to the sliders we all got so used to. Instead, all the tactics will be created based on player roles. In order to increase the options that we have, Sports Interactive have come up with eight new player roles in FM 2014 and we’re here to learn about each of these new roles. So if you want to get ahead of other players, read on our guide for the new player roles in Football Manager 2014!

Half Back
He looks to serve a role somewhere between that of an aggressive sweeper and a defensive midfielder. With a half back, the central defenders themselves will push higher up the pitch while the Half Back drops deeper than a standard midfielder and, in addition to his defensive duties, looks to offer an outlet for quickly recycling possession when the team’s attacking play breaks down.

Limited Full Back
He knows his strengths and weaknesses and focuses predominantly on his defensive duties, scarcely going forward into a more attacking role.

Complete Wing Back
He loves to attack and whilst he is capable of occupying his defensive duties, his natural inclination is to affect the game in the opposition’s defensive third

Enganche
He is the prime creator, a “hook” that joins midfield and attack and operates behind the strikers and a playmaker who sticks to his position and becomes a pivot to his team as they move around him. It differs from the Trequartista who likes to roam from his position, drifting around and looking for space between the lines

Regista
He is a more aggressive version of the deep-lying playmaker, suitable for possession-oriented systems that press high up the pitch. Given complete freedom to dictate play from deep positions, the Regista offers a dynamic and unpredictable creative outlet from behind the attack, who seeks to maintain intense pressure by constantly looking for new chances as his more advanced teammates get into goalscoring positions.

Wide Target Man
He is the main outlet for wide clearances and long balls from the back. Ideally positioned against a smaller and weaker full back, he will be asked to get hold of the ball and keep it before recycling it to a teammate.

Shadow Striker
He operates as the team’s main scoring threat. Usually coupled with a deep-lying forward, the shadow striker aggressively pushes forward into goalscoring positions as the ball moves into the final third and looks to close down opposing defenders when out of possession.

False Nine
He is an unconventional lone striker who drops deep into the midfield. The purpose of this is that it creates a problem for opposing central defenders who can either follow him – leaving space behind them for onrushing midfielders, forwards or wingers to exploit – or leave him to have time and space to dribble or pick out a pass.

Some really interesting new roles here and I already am looking for a Flase Nine/Shadow Striker combination. Let’s hope that this year’s match engine is not completely ruined like that of FM 2013 though!

What do you think about the new player roles in Football Manager 2014? Which are your favorite?