It’s estimated that over 164 million people in the world are accessing online gambling on their phones and mobile devices. The online gambling sector has advanced enormously in recent years, and alongside sports betting, online slots are helping to drive this rise in popularity.

If you Google ‘online slots’, the search engine will return 477 million results in less than 0.35 seconds (wow!) So how can you be sure to find a good slot game to play when the market is so saturated with options? Fear not, we’re here to bring you all you need to know about this year’s must-play online slots game.

‘Fluffy Favourites’ was created by Virtue Fusion/Playtech and in this article, we cast a critical eye over the fluffy fun machine…

What’s the story?
Despite being fairly simple in nature, every slot machine must have a unique theme or style to make it stand-out in a crowded market place. As the name would suggest, ‘Fluffy Favourites’ centres on cuddly creatures.

The garish green background features a circus tent in the background and the reel’s icons are all cuddly-toy animals that you could expect to win at any fair stall game. The graphics are fairly basic, which is intentional, to give the game a classic fair stall feel.

Rather than turning us off the game, the basic graphics had a strange, comfortable and alluring effect that kept us playing for much longer than we had planned.

What features does Fluffy Favourites have?

The Toybox Pick
Just like the little green alien’s in Toy Story you’ll be staring at your screen chanting ‘THE CLAAAW, THE CLAAWW’. For if you land three or more of the grabber symbols – anywhere in view – you can make a prize pick for each of the claw symbols on your screen.

That means you have a possible five prize picks, all of which could be worth up to one hundred times your total wager. So keep your eyes open for “THE CLAAAW”. 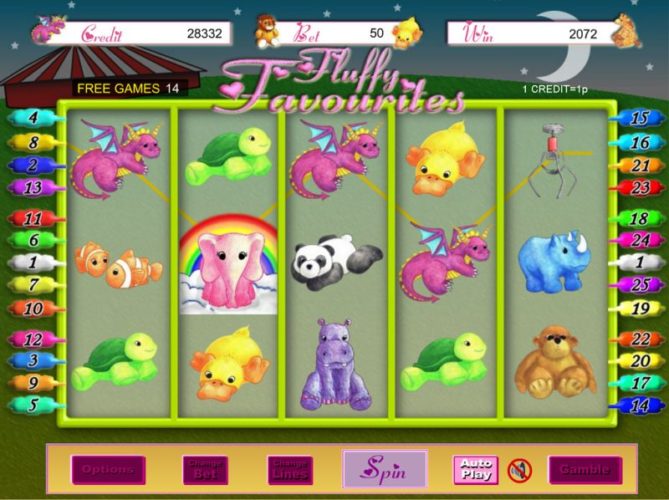 Free Spins
What slot game is complete without the free spins feature? None! Fluffy Favourites is no different in offering free spins and the feature you need to look out for is the cute pink elephant.

As well as getting free spins, any wins that you make in the same round will be tripled! Beneath is a list of the free spins on offer from the mystical pink elephant.

Gamble mode
Like any good 1990’s game show, Fluffy Favourites has a gamble feature, but as always it comes with a high-element of risk. Any time that you get a win you’ll be offered the chance to play double or quits.

If your luck is out, you lose your winnings, but if it’s in, you double your haul with the maximum win being capped at 3.2 million coins.

What’s the appeal?
In essence, the appeal of this slot game is the simplicity. Consumers are gradually becoming disinterested in overly complex slots. If you want great graphics and a solid story, you’re more likely to turn on your PlayStation rather than log into an online betting site.

Of course, a classic fruit-machine style slot will struggle to attract players in the current market, but the simple graphics and approachable theme of ‘Fluffy Favourites’ makes it easy to focus on the actual aim of the game, winning coins!

Also, the vast majority of people will have gone down to the fair in their youth and tried to win cuddly toys at a stall, some of you reading may have even won one or two! The universality of this pursuit makes ‘Fluffy Favourites’ concept gender neutral, which is an obvious bonus.

In an attempt to attract more female players, many companies are producing cliché-ridden games which, rather than attracting women, alienates them. Virtue Fusion’s less saccharin attempt has avoided this and the result is a great slot.

Ballers or scrimpers?
Whether you’re a big-money player or a cautious spinner, ‘Fluffy Favourites’ caters for everyone. The game is playable on desktop and all online devices with a minimum stake of 25 pence and a maximum of £12.50.

Keep your eyes open for…
If the review so far has piqued your curiosity, then you’re going to need to know what to look out for before you play. You already know all about pink elephants and the claw, but what are the other symbols to go for?

The Hippo: This water-dwelling African beast and once favoured pet of Pablo Escobar will be a symbol you’ll hope to see appearing on your screen very often. If 2, 3, 4 or 5 of these cuddly hippos appear on your screen you’ll win 10, 100, 500 or 5,000 coins.

Goldfish & Ducklings: Ahh, goldfish, the staple of fairground prizes. If you land these little fish you’ll be rewarded with 100 coins per payline, as you will if you land the cute ducklings.

Rhinos & Giraffes: Upping the ante a bit are the rhinos and giraffes which will net you 200 coins per payline.

Tortoises & Lions: Three lions on the shirt has been all the rage this summer, but if you get three lions on this game you’ll get 900 coins, likewise if you line up three tortoises.

Pandas & Monkeys: Who doesn’t love pandas and monkeys? Answer – no one. You’ll love them even more when they award you 500 coins per payline.

Purple Dragons: Okay, so technically this isn’t an animal, it’s a mythical creature, but it’s one of the most rewarding on the game offering 1,000 coins per payline. After pink elephants and hippos, purple dragons are the symbols to look out for.

‘Fluffy Favourites’ is a clean, fresh and simple slot game guaranteed to keep you playing for much longer than you planned, which is the beauty of all good games. The game offers a 95% return to player and small-to-high stakes make it universally playable for anyone.