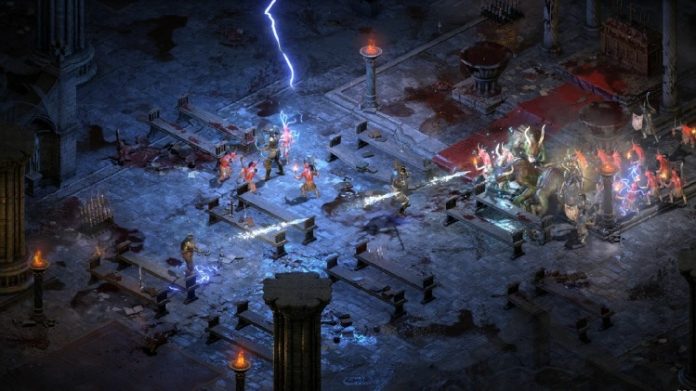 The popular online video game, Diablo II: Resurrected has stormed the gaming world with a lot of quality improvements to remark its 22 years of existence since its release on June 29, 2000. When it comes to Action-RPGs, no doubt, Diablo is the bomb. It meets all the standard criteria for judging the quality of all ARPGs. Diablo II is the latest foray from Blizzard Entertainment with updated graphics, well-structured cutscenes, and a progression that crosses between all the platforms.

Diablo II is not only an amazing option for veteran gamers who have exhausted the 1997 original game, but new players who have never battled evil before can also jump on this refreshed version. All thanks to its recent upgrade and the amplified graphics, you won’t have to play the game wearing spectacles. It offers you an intriguing experience that glues players to their screen for hours, lost in the thrill of the game.

But amidst all these, the big question here is: is Diablo II Resurrected the best in the Golden Age of ARPGs?

No doubt, Diablo II has remained the best ACTION-RPG ever released. Only a few ARPG releases have ever come close to its status. Even though Diablo II: Resurrected has no new content added to it, all its procedural levels guarantee you top-notch gaming experiences. However, in this article, we will be leading you through the revelation of why Diablo II: Resurrected remains one of the best ARPGs of all time.

What makes Diablo II outstanding among the others?

Judging from the stunning graphics, the game is fully-3D, giving both old and beginner players the opportunity to explore the town of Tristram and its outskirts, while surging through the blood once more. How Blizzard Entertainment spiced up the landscape graphics is just superb. Gory and Terrifying. The perfect fit for games of its caliber. Its scary hordes filled with greater evil have never been so alive. Interested to know why this game has so many ratings? Then keep reading through.

1.   A greater number of the game’s developers are metalheads

It wasn’t an unforeseen coincidence that the game first came into being when the nu-metal phenomenon was at its peak, and the crunching soundtrack was in vogue throughout the gaming mainstream. When we speak of the remaster, the game developer, Dustin, and his colleagues would always seek a nu-metal soundtrack from which they can draw inspiration. Lorna Shore’s To The Hellfire gave him this touch of surrealism he so desires for Diablo II: Resurrected. The aim was to bring in mid-paced soundtracks of ghosts to be used for the game. The shrill. The screams. The mood. The terrifying atmosphere. All are a perfect match for the genre of Diablo II. And if well analyzed, Diablo II: Resurrected remains the best metal game of all time.

2.   Dark fantasy has always been the best tune

The gory blend of horror and the good-vs-evil scenario added life to the gaming experience and made the adventure even more thrilling. Just like in the original game, Diablo II needed a soundtrack that would be a perfect fit for the battle under the shadows. While the developers of some other popular games chose to go for the obvious option of infusing a high-tempo soundtrack, Diablo II decided to take a different turn and try something unique by steering into the metal genre in search of some variety of nightmarish soundtrack that will be familiar to metal fans. The aim was for the tone launched into the game’s production to be textural, dark, and moody.

Speaking of the classics, it’s second to none. One of Diablo II’s significant developments: Resurrected, is that the game has long been recognized as a player’s all-time favorite, which can also be attributed to the quality of its soundtrack. Players find the music special and iconic to them, and it adds flavor to the overall gaming experience.

3.   The landscape of the sanctuary as an interactive album cover

While you journey through the town of Tristram, through the dark dungeon, the whole storyline is simply iconic. The whole visual effect of adventurers racing to destroy the Lord Of Terror is just a touch of finesse. Although the developers of D2R paid more attention to creating a wild atmosphere and dread-stricken visuals with a black metal atmospheric vibe, the gory imagery and the focus on fast-paced actions will grip the attention of power thrash and metal fans alike.

The amazing thing about D2R is its clarity in upgrading its graphics. You can gain access to whichever location you wish in search of D2R items, including Runewords, Runes, Charms, Jewels, Set Items, Unique Items, etc. And these items are used in upgrading your characters to take down devils and monsters.

4.   The Dark Wanderer and other Villains

Just as in other ARPGs, there has to be the existence of tough villains and enemies to increase the credibility of the game. And Diablo II Resurrected does that to its fullest. In all the original game and its other released versions, there has not been a villain more tragic than The Dark Wanderer, who appeared more in D2R than in other versions. In older versions of the game, the warrior seemed to conquer Diablo when he melded himself with the demon’s Soulstone and became possessed by the darkness within it.

One particular thing about Metal that gives Diablo II an edge over other ARPGs is how its concept of good vs. evil is being structured, and how it presents good and evil. How it blends it and crushes whatever comes it’s way.

5.   The technological improvement in the game is second to none

In its 22 years of existence, the development of Diablo II has used technological advancement as a tool for bringing life back into the game while maintaining the originality of the gameplay. Blizzard has taken full advantage of hardware technology by making D2R available on PC and consoles, Switch, PlayStation, Xbox, etc. They are hell-bent on remaining on top of the world. Players treat the online game as one with so much respect that everyone wants to have a taste of it. Imagine the luxury of having a 22-year leap in technology all in one game. And Blizzard has done an amazing job in retaining the original idea of the game despite the major changes.

Now, a lot of players can gain access to the game on different devices. The aim is to attract new players that will enjoy the quality experience and the beauty of the online game. And to this, there has been an immeasurable success so far.

Diablo II might be 22 years old, but it has still retained its quality and a soft spot in the heart of ARPG lovers. As to the question of whether D2R is the best ARPG ever, the answer is obvious already. D2R remains the all-time best. Although a lot of criticisms among some players have erupted about the game being hellish, it doesn’t dwindle the relevance of the game in any way. Gamers still maintain their relevance. And despite its shortcomings, the legendary has proven its worth among lovers of online games.