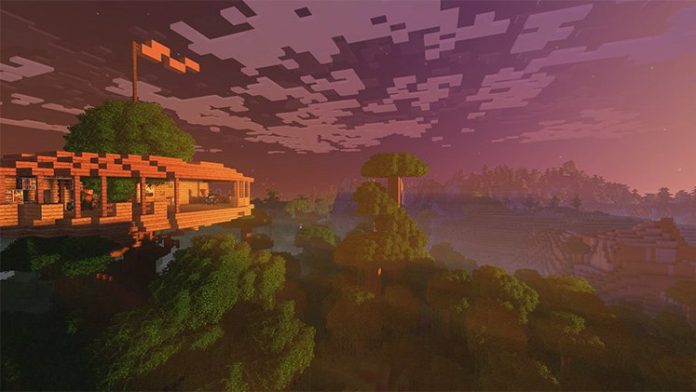 Who says a game made of giant blocks and pixels can’t have great graphics? The new Minecraft Super Duper Graphics Pack is a visual masterpiece that enhances your entire gaming experience. The graphics pack is a DLC that will add a sense of hyper-realism to your world’s environment.

Lighting has always been a strange concept in the Minecraft world. The way torches, lanterns, sunlight, Redstone, or any other source of light radiated throughout the world could, at times, feel a bit chunky or glitchy. Chunkiness was to be expected in a game that has its mechanics based on a block by block system, but it could also be hard to tell how dark or well-lit an area was.

With the Super Duper Graphics Pack, the lighting system is greatly improved. To say that it looks smoother would be an understatement. Shade beneath trees blends naturally, allowing players to fully visualize and immerse themselves in the situation as if it was in real life. While exploring caves, ray of light from the exposed surface beam down and illuminate the immediate area. It really is impressive how something as seemingly simple as lighting could create such a big impact on how the game’s environment is received.

Another surprisingly aesthetic aspect of the lighting enhancements is that the light will now fully interact with the environment. The light glowing from the moon creates a dim, subtle atmosphere of a dark, barely lit night. Lights from lantern, lamps, and torches reflect and shine across the glassy surface of water. The oceans and lakes will never look bland again.

Clouds are finally improved in this new graphics pack. Rather than a giant hunk of white blocks moving through the sky, clouds look puffy and misty, even if still block-shaped. Light fully interacts with the clouds as well. Sun shines through it, depending on the density of the clouds, and shimmers around them if partially blocked. On the topic of the moon, it should also be noted that the lunar light, if blocked by clouds, radiates from behind and even glows a bit through onto the ground.

Before night arrives, treat yourself to a Super Duper Graphics Sunset. As the sun drops in the afternoon, to the evening, and finally the night, the skies and lighting become orange, beams of light rip through the clouds, and shadows stretch for blocks upon blocks, just as they would in great outdoors.

These enhancements are only further complimented by the advanced textures placed in the game. Everything from plants, to ores, and even the dirt is fine-tuned to add eye-appeal. The trees look like you could reach out and pluck a leaf off, the bark gains an ashy tint, and plants, like ferns and flowers, are shaded to make them really pop out.

The Super Duper Graphics Pack will be available for both Xbox One and Windows 10 PCs. As you probably have figured, this is a big, complex graphics pack that runs smoothly on a high powered or fast computer. If your system can handle playing with super far visibility and high graphic settings in its current state, then the Super Duper Graphics Pack should work just fine on your computer.

The Super Duper Graphics Pack further enhances the already great graphics update being implemented into the game after the Better Together update is added. As a part of Better Together, which treats all formats of Minecraft as if they were one, the graphics are being revamped to 4K HDR. Now, whether on your console or gaming PC for Minecraft, you can go mining with your friends in high definition!

Apex Minecraft Hosting are one of the leading providers of private Minecraft serving hosting in the US and worldwide.