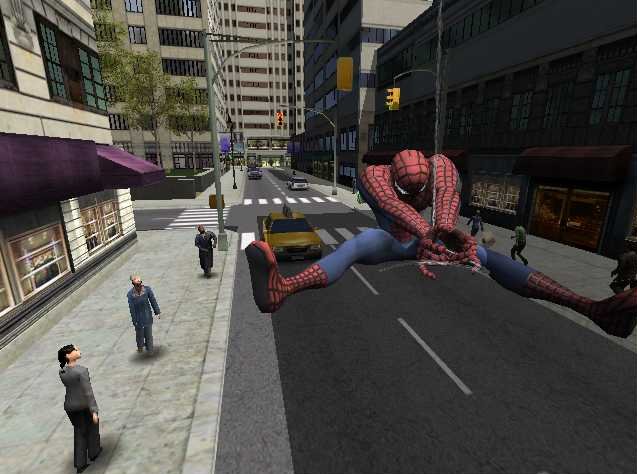 The “Amazing Spider-Man 2” video game tie-in was recently released to what can be confidently described as a thunderous malaise. But, not content with the general apathy that the franchise’s current-gen adaptations have inspired, I’ve decided to come up with a list of a few things that might send Spidey soaring again.

Beenox’s big bet for AMS2 was the inclusion of Spider-Man 2-style web-swinging, a promise which served mostly to prove that the developer has no idea what that really means. Oh, sure, you can zip around town by your web-lines, using the right bumper to fire to your right and the left bumper to fire to your left. And you even have to actually look for buildings to connect to! Cool, right?

But why, then, did Beenox decide to make free-roaming a complete chore by introducing its hero-menace system, which demands that you constantly juggle a series of increasingly dull and repetitive side missions or suffer the consequences? Made worse by the fact that these aren’t even random encounters out in the world. No, you have to willingly thrust yourself into a loading screen, followed by the exact same mission that you’ve already completed a hundred or more times, and then wait around for another loading screen before being allowed to swing around just long enough to do it all again. Kotick-forbid, they actually take the time to model out the city with the depth required to let us transition seamlessly from aerial maneuvering to ground combat and back again.

Also, please remember that Spider-Man is an outside pet. It’s cruel to coop him up indoors when all he wants to do is swing around the city. Give him a backyard of an appropriate size and let him find his own fun. Speaking of which, stop nerfing the physics engine. Players don’t need a nifty little animation every time Spider-Man does his thing. What they do need is the ability to do dumb stuff of an amusing nature, like being able to swing all the way around an object or hang motionless in the air while their arms are suspended by two wires that they haven’t let go of.

Remember, even Spider-Man 2 wasn’t a great game. But it sold well because it was a darn fun toy.

These wrist-mounted joy factories are one of the great, iconic pieces of fictional technology that everybody can instantly recognize the endless possibilities of. So why are they only ever given a simplistic upgrade path and a few key moves in the games? Half of the early Spider-Man stories are about Parker figuring out the nature of his opponent and adjusting his equipment accordingly. Why can’t we play around with stuff like the viscosity of the webbing or even invent our own combos?

And why do we never run out of web fluid? Sure, it makes sense to have a limitless supply during missions but when we’re just running around town? Think of the strategic opportunities inherent to having to adapt in the middle of combat.

And now that Marc Webb has brought back the artificial web shooters, it just makes sense to reflect that update in the tie-in games themselves. Although, now that I think about it…

3. Does Every Spider-Man Game have to be a Movie Tie-In?

If you look over the numbers, it’s clear that Spider-Man just doesn’t sell like he used to. Early games like the then-aptly titled “Spider-Man” for the PS1 could move about the same amount of units as the entries that also had the boost of being connected to the marketing campaign for a film (source: http://www.vgchartz.com/gamedb/?name=spider-man). Slowly but surely though, the franchise’s ability to make a dent in the charts decreased.

At this point, the license is in the same sorry shape that Batman’s was in before Rocksteady came along and showed us all how it was done with the Arkham series. In both cases, there wasn’t a whole lot of goodwill left to lose.

So maybe it’s time to hire a studio with a vision and just let them do their own thing. Because clearly the situation with Beenox has become untenable. I’m not going to speculate on what behind-the-scenes factors have made it so but even their own earlier games were more polished and original than what they’re putting out now. Maybe that’s just what happens when you have to release four Spider-Man games in five years.

4. New York is not Gotham and Spider-Man is not Batman

Well, yeah. But then, most third-person action/adventure cash-grab games are. When I said earlier that Rocksteady showed us all how it was done, I meant it. Because nowadays anyone in gaming without a clear idea of their own for a combat system just rips off the Arkham games. And Spider-Man, sadly, is no exception.

But why? The guy’s got all kinds of moves that Batman could only dream of! By the combination of his Spider-Sense and crazy reflexes, most anyone who attacks him is basically moving in slow-motion. Shouldn’t we be able to take advantage of that? What about being able to target specific body parts to send people flying? What about true physics-based combat with a tool that’s actually designed to take advantage of it? Heck, maybe we shouldn’t even be making these third-person. Can you imagine what free-moving, first-person combat would like from Spider-Man’s perspective?

Awesome is what. Awesome.

5. We’re Not Saying You Can’t Make Us Feel Responsible

It may seem like I’m suggesting that they just come out with a Spider-Man simulator instead of an actual game. And while that would be totally neat, I don’t think they have to go quite that far. One of the major issues with the hero-menace system is that it profoundly misunderstands Spidey’s obligations and interactions with his city. First of all, he’ll always be regarded as a menace. There’s nothing that he can do to change that. Secondly, his responsibility isn’t just to the citizens of New York. It’s also to take care of Aunt May, to pay for his own upkeep and to bankroll his swingin’ lifestyle.

All of these come down to one simple fix: Spider-Man games need some kind of economy. If you really want to nail the character then he’s got to be worried about rent and the fix is to set up his camera just right before engaging with the baddies. The more crime he fights, and the better a photographer he is, the more opportunities he has to fight more crime and make more money.

But all of this comes from the heart of the character and ultimately what we really want are solid games that are true to that. And there are a lot of potential ways to design something that fulfills those desires, a lot of great ideas out there for how to step into the boots of everybody’s favorite wall-crawler, but at the end of the day what makes for a great Spider-Man game is still what makes for any great game: ambition and the talent and freedom to pull it off with.

So I guess what I’m really asking is: isn’t it time someone saved Spider-Man from Activision?