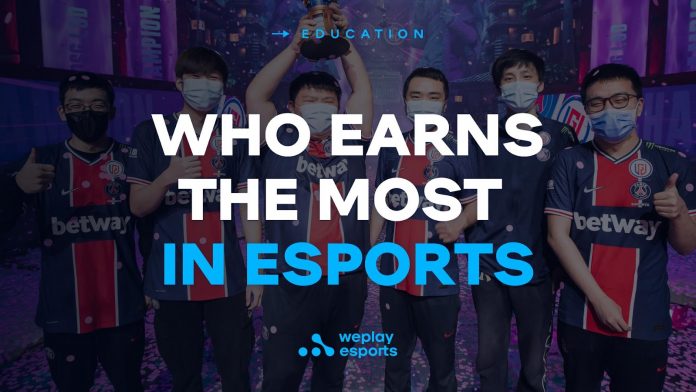 Prize pools, salaries, and benefits are popping off the charts in the esports scene. Let’s dive into the organizations and players with the biggest earnings in the esports world!

Which tournaments have the largest prize pools?

Esports has many disciplines with different tournament structures, prize pools, play modes (team, single, duo), and organizations can have players in a myriad of disciplines or focus on a specific genre or title. There are some titles, however, that offer huge prize pools, and it’s those disciplines that are the focus here — they distribute millions of dollars every year!

One of the fan favorites, the everlasting Dota 2 is a game developed by Valve Corporation and released as a beta in 2011. The game’s tournament structure is set by the Dota Pro Circuit (DPC), a system that divides the tourneys between Regional Leagues, Major tournaments, and a World Championship called The International (TI) — a yearly competition between the top teams in the discipline.

Dota 2 The International 10 will have the highest prize pool of all esports titles. The event is set to happen in October 2021 in Bucharest, with over $40 million total prize money — an impressive amount that beats to the ground the previous record, which was also established by Dota 2! Sixteen teams from all over the world will test their skills in the race for first place. It’s important to mention that in 2020, the event was postponed due to the COVID-19 pandemic — therefore, this year’s TI has already generated a huge amount of hype and excitement. Let’s wait and see who takes home the prize!

According to Esports Earnings, Dota 2 has already distributed over $235 million in total prize money and sits in first place as the highest-paying esports title. The most well-paid player in professional Dota is Dane Johan “N0tail” Sundstein.

While having a different tournament structure and format, CS:GO is another game by Valve Corporation with impressive esports events and prize pools. The Regional Major Ranking (RMR) system has an earnings cap for each tournament, but they happen very often, which makes CS:GO the second highest-paying esports title.

For the first time in history, a CS:GO Major will pay $2 million dollars — doubling down the regular amount. The PGL Stockholm Major will be the first CS:GO major played over a LAN, with the public present, and as a result, this event is being massively hyped. It’s going to take place in early October 2021. Before that, the event with the highest prize pool in the discipline happened in 2016: the World Electronic Sports Games (WESG) hosted in Changzhou, China, gave away $1.5 million in total prize money.

According to the analytical agency Esports Earnings, CS:GO has already distributed over $118 million in prize pools. The highest-paid player in the discipline is also danish: Peter “dupreeh” Rasmussen.

This third-person shooter developed by Epic Games experienced rapid growth and was soon up to par, especially in 2019. The world championships, called the Fortnite World Cup, are held in solo and duo formats, with qualifiers happening all over the world.

Due to the nature of Fortnite, it’s the discipline with the highest overall individual earnings in the esports industry, if we consider the tournaments-to-earnings ratio. The top prize pool tournament is the 2019 Fortnite World Cup Finals — Solo, with over $15.2 million dollars distributed and surpassing the $30 million mark if we consider the duo finals as well. An international event that rewarded over 128 individuals in each category.

According to Esports Earnings, Fortnite has already distributed over $108 million in prize money, making the discipline the third highest-paying esports game. North-American player Kyle “Bugha” Giesdorf, the winner of the 2019 solo finals, is the highest-paid professional player in the discipline.

Riot Games’ multiplayer online battle arena (MOBA) is the most-watched game in esports history, according to Newzoo. The title has two international events every year, with the Summer World Championship being the most important; however, the regional leagues happen throughout the year, placing League of Legends players among the top earners in esports.

The highest-paying tournament in terms of overall earnings is the Worlds 2018, with $6.4 million in total prize money. According to Esports Charts, the event had a whopping 200 million concurrent viewers at its peak, making it the most-watched tournament in esports history by a mile. It was the first time a Chinese team (FunPlus Phoenix) won this event, after competing in the finals against the Europeans G2 Esports.

LoL has already distributed over $86 million in total prize pool, according to Esports Earnings. That makes the title the fourth highest-paying esport, with the legendary South-Korean Lee “Faker” Sang Hyeok being the highest earner, three world championships in his pocket.

There are many other important disciplines that, despite not making it to the “big four”, are very relevant to the esports scene. 2021’s Call of Duty League, for instance, had a $2.5 million prize pool. Games in different styles such as Hearthstone, Rocket League, and chess (yes, chess) are also claiming their slice of the esports earnings pie, which means that professional video gaming has different styles and varying audiences, which is beneficial for esports’ prospects.

Furthermore, mobile gaming is rising in the charts now. Arena of Valor, for instance, already distributed $35 million in prize money, and games such as PUBG Mobile and Free Fire are among the most-watched esports titles. The future seems to belong to mobile!

Organizations that collected the most prize money

When we talk about the top earners, many organizations come to mind. Most are active across many disciplines, sharing the rewards between players. The historic top earner is Team Liquid — who has collected over $37 million in prizes only —, being well-known in League of Legends, CS:GO, and Dota 2, with over 61% of the organization’s profits coming from the latter. The highest-earning esports player from the organization is Ivan “MinD_ContRoL” Ivanov, with over $4 million already collected from his team.

Here are the top earners, according to analytical agency Esports Earnings:

Who are the highest-earning esports players?

Unsurprisingly, the 11 highest-earning esports players are from Dota 2, since the title’s prize money overcomes the other disciplines by far. In the 12th position, there is an “intruder” from Fortnite — Bugha — and then Dota 2 dominates the charts until the 31st, where other Fortnite and Counter-Strike: Global Offensive players start to appear.

The five highest-earning players all come from Dota 2:

If we rank esports players by discipline, excluding Dota 2, we will have the following list:

Many disciplines have high total earnings, divided into many tournaments. Let’s look at the three highest-earning esports players that weren’t mentioned yet.

The first discipline that features a high earner is Shadowverse, a digital collectible card game developed by Cygames. Relevant competitors include Hearthstone, Legends of Runeterra, and Magic: the Gathering Arena. Fortnite’s main competitor, PLAYERUNKNOWN’S BATTLEGROUNDS (PUBG), is also featured, alongside the well-loved Call of Duty franchise.

Professional gaming isn’t easy and many players need to find different methods to keep their incomes high, especially outside of the tier-1 scene. Among the most popular choices is streaming their games and collecting subscriptions, donations, and sponsors in the audience.

Although not all professionals stream their games, most of them happen to do so to promote their organizations and increase their profits. However, the most well-known streamers aren’t necessarily professional players: they dedicate themselves exclusively to creating content and entertaining the crowd.

Due to its nature, in terms of absolute payments, streaming usually rewards more than professional esports careers. Apart from competitive Dota 2 and Fortnite, streamers are among the highest-paid individuals in the esports market, with Felix “xQc” Lengyel, a former Overwatch professional player, collecting almost $2 million in 2020. If we consider this as his average yearly income since his career began (2017), the streamer is easily the top-earning individual in esports.

Thoughts about the most well-paid players and organizations in esports

Either divided among the five members of a team — in disciplines such as Dota 2 and LoL — or received individually, the highest earnings in esports are impressive numbers. Across many tournaments, each immensely important for a professional career, the revenues paid by esports tend to grow every year.

As we can see, the highest-paid esport is Dota 2, but nearly every discipline has multi-million pools. It’s important to mention that games not considered esports weren’t included, such as tournaments in Super Mario (they are a thing), therefore we didn’t mention a few well-known players.

Whether it’s for fun, streaming, or competing, players making serious amounts of money help us understand this industry — and why it’s growing so fast.