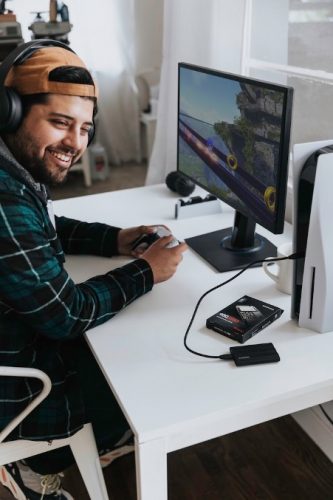 Illustrating the Positive Impact of Gaming on Society

A couple of decades ago, most people felt that gaming was a niche hobby that would eventually go away. Parents would not approve of excessive gaming, while societal issues were also blamed on video games.

Much has changed in the subsequent years, as games such as first-person shooters, sports games, open world games, and online bingo have all become prevalent in society for various reasons. Whether through a computer, tablet, smartphone, VR headset, or gaming console, people can enjoy their favorite titles offline and online.

Gaming is a hobby that hundreds of millions of people enjoy around the world, with games such as Candy Crush, Counter-Strike, World of Warcraft, Genshin Impact, Fortnite, and Hearthstone making a huge impact on society.

Between the greater cultural influence of gaming and the ways in which it can make people’s lives better, there are countless positive effects of this hobby on society. Below is our analysis of how gaming has positively impacted society.

When a person gets to spend several hours a day doing what they enjoy the most, their emotional wellbeing is likely to improve. Gamers most definitely have that experience, as surveys have shown how they feel calmer, more comfortable, and more relaxed because of their hobby.

Many people who turn to gaming for entertainment do so because they may not be entirely satisfied with their life. Perhaps they have issues at home, troubles at work, or they’re finding it hard to fit in within their present surroundings.

Games offer an escape from that reality, which can make a person feel happy, rejuvenated, excited, enthusiastic, relaxed, and comfortable.

An opportunity to make friends for life

People who don’t play video games have a misconception about gamers and how they engage with their hobby. People assume that gamers are isolated and spending all their time playing games without talking to anyone or socializing with friends.

The opposite is in fact true, as video games are a wonderful way to meet new people and make friends. Most games these days are played online, with players competing against each other through servers or one-on-one matchups.

When you’re playing against someone online, you can chat with them within the game platform. Such chats can lead to a bond forming, as players talk about their common love for the game and other hobbies.

Many games, such as Destiny and Destiny 2, have cooperative modes such as extremely challenging raids where you have to team up with other people online in order to complete the mission. You only succeed through teamwork, and you can’t go it alone, which is a great lesson to learn in life.

One game that has an especially active and thriving community is online bingo. Millions around the world enjoy playing bingo online, with the digital version of the game beginning to compete with bingo halls for people’s attention. Players can join chat rooms while playing bingo, allowing them to freely interact. Such chats can often lead to players in the same city deciding to meet up in the future to play bingo in person.

Improvement in cognitive and problem-solving skills

Video games are not only about beating up fictitious enemies or taking on other gamers. You must think critically and make split-second decisions if you want to be successful when playing a video game.

If you watch a game of Counter-Strike or Fortnite, you may notice how quickly everything happens. The best players are the ones who not only have great reaction times, but can also think on their feet and make decisions based on ever-changing circumstances.

Such gaming experiences don’t just help players as they play new games, but also with other endeavors. Your cognitive and problem-solving skills are objectively better if you play games at a high level, as you are having to use and hone those skills to become a better video game player.

Parents who don’t like their children spending a lot of time playing games may want to reconsider their stance. While you may not want your kids spending three to four hours a day playing games, a couple of hours a day after they get their school work done shouldn’t be a problem. In fact, those kids are probably developing useful skills through their video gaming passion.

Developing an interest in video games can lead to other passions. Surveys of gamers show that many people end up going into coding, game development, digital art creation, or other creative professions because of how much they enjoyed playing video games as kids.

Someone who loves playing a sports video game may even decide to try that sport in real life, resulting in them pursuing a career in or around that sport. In that respect, video games can certainly serve as inspiration for a person’s future career.