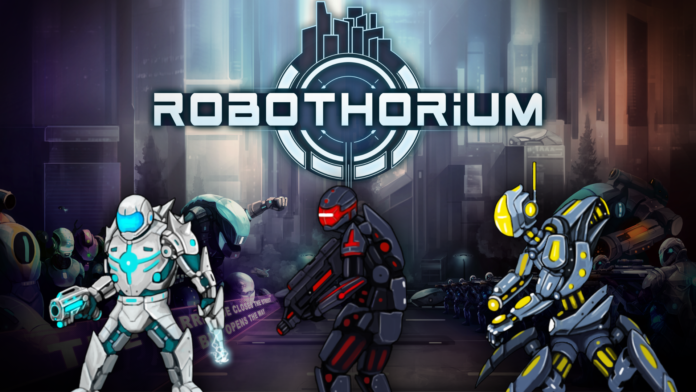 In short, Robothorium is a tactical, turned-based strategy game developed by Goblinz Studio. Unlike most roguelike games, it capitalizes on an authentic premise and sci-fi aesthetic. The result of which is a cerebral RPG that benefits from its streamlined systems and silky mechanics. Furthermore, an enthesis on intensive squad-management and a flexible progression tree create the illusion of reality. In turn, this provides countless hours of playtime.

All in all, this is a robot rebellion that you can’t afford to miss. Viva la Revolution! Now go forth and multiply my dear robot renegades. Teach those hostile humans who’re the bosses. The future of robotkind depends on it.

Robothorium is a game that rewards time spent, and effort put in. As you gradually get to grips with the system, nothing ever feels like a grind. Instead, you’ll take comfort from past wrongs and learn from new experiences. That said, the journey from rookie to a novice is a long one, but it’s worth the weight in gold. So then, let’s delve into the beating heart. Or somewhat the artificial tick of this sci-fi sensation. Word of warning: prepare for sensory overload. What follows is a new dimension of RPG.

Right from the off, the notion of choice is evident. Robothorium hosts three difficulty modes. The most brutal of them, revolution, which issues perma-death to comrades/robots. However, your safest bet is either rebellion or insurrection mode. Both of which will issue ample challenge and fruitful reward. I tend to shy away from perma-death, but that’s mainly due to fear of failure.

Before we touch upon the game-play, let’s address the story. In essence, it’s irobot meets Detroit: Become Human, whereby androids, now sentient and capable of freedom of thought, turn on their human captors. As a result, civil unrest looms large as advanced A.I rally against the human regime. What follows is a fight between humanity and technology. It’s a nice detour from the norm. All the while, the story acts as a unique premise for the RPG genre.

Initially, there’s no handing holding here, and the bright and breezy tutorial thrusts you straight into the firefight. No getting bogged down in a manifesto of knowledge or a cryptic codex, just the occasional hint and tip to help you on your way. To extract the most out of the experience though, I would recommend getting to grips with the core systems. Besides, understanding the intricacies at play could grant the subtle edge in victory, and its small margins by most accounts.

Next up, we have the classes. Overall, there are six to choose from — each one with varying pre-set class abilities, personality traits and bonus attributes. For instance, the coward trait has a drastic impact on damage modifiers and cooldown rates. That said, bonus perks grant things like regen and speed. Whether you choose the warbot, repair bot or riot bot, each class is vastly different by comparison. As a result, this helps to a break the feeling of monotony. Thus, allowing for full-scale immersion.

As well as the various classes to choose from, there are also factions. These include, but are not limited to Supremachine, Humanobods, Cyberrights and The Chips. Each of which has a reputation to uphold. What’s more, the rep system dramatically impacts the game, and grants unique bonuses based on choice. Thus, selecting allegiances becomes an essential factor, and neatly ties into progression. 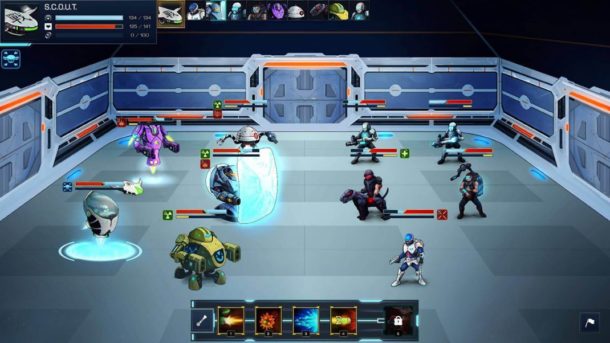 In truth, the factions you align yourself with in Robothorium will shape the battle modifiers. For instance, some may enhance critical hit chance, yet reduce speed and power in equal measure.

Talent points gained via XP allow you to upgrade abilities and superpowers as you increase in level. For the most part, the extensive array of skills and superpowers available grant you the flexibility to adopt varying play styles. More still, it’s this sense of freedom, that issues the most reward. Likewise, the scale and scope of the player skill tree create high replay value.

In true dungeon crawling style, players point and click their way around futuristic backdrops, while a map in the bottom corner helps aid navigation. As with all RPG‘s, loot plays a big factor. But as an android, being tech-savvy has its privileges. Hence, hacking cameras and terminals will open new rooms, while drones and security bots deactivate when manually shut-down. Or you can reprogramme them to turn on the enemy.

Mostly, all the above help to flesh out the experience to some degree. Soon enough, you’ll be adopting unique and inventive ways of bypassing patrols or ambushing the enemy head-on.

Now then, let’s talk special powers. There is a host of skills to employ in Robothorium, and these vary from one character to the next. For instance, the electronic shock short circuits enemies, and prevents them from using power moves. On the contrary, Energetic Zeal issues regen rates to party members — Albeit, at the expense of a drop in critical hit chance. Also, rifle damage, which inflicts hit points, in turn, affects the cool-down limit success rate.

Overall, the nature of its in-depth game systems, where choice impinges upon the outcome of events, creates an immersive experience. As a result, all actions carry with them meaning and purpose. Those of which carry opposing caveats and consequences. That is where Robothorium truly stands out from the pack. Although the learning curve is often steep, the climb feels worth it, thanks to the ergonomic yet complex mechanics.

To conclude, Robothorium will appeal to a wide range of players. Especially those who enjoy RPG’s and tactical squad-based battle scenes. Not only that but with a flexible progression system and strong dungeon-crawling elements, there are many systems at play, all of which merge into one another as a part of a free-flowing package. Hence, it’s a seamless experience that rarely ever feels like a grind.

Plus, the unique sci-fi atmospheres and arenas refreshingly deviate from genre conventions. All in all, this is a strategy game that will test you to your limits and reward you for your efforts.

What did you think of Robothorium? Please chip in with any views you may have. Your opinions matter to us.