The battle arena was a feature teased for a long time by Zynga for FishVille and it has finally been released today for all players. It is represented by a new tank that’s been added to your existing ones and for now it appears that you can only fight against AI controlled fish. Read on to find out more about the FishVille Battle Arena!

If you manage to beat all the opponents in the Arena, you will unlock the Charcoal Lionfish, a limited and interesting fish. You also have three types of foods to use in order to increase the stats of your battle fish: IQ, Agility and Strength food. Additionally, you can win or earn Arena Decorations that will help your fish in battles, so the more you have, the better is for your fish.

So… how to battle other fish in the Battle Arena?

First of all, click your tanks in the lower right button and select the Battle Arena Tank. There, select one of your fish and an opponent from the list you’ll see below. The stats of the opposing fish are hidden, but you will know their Strength stat.

How do you win a battle in the arena? It is pretty simple: the stronger fish always wins, so make sure you are well trained and have good numbers for each stat you own. Additionally, you gain bonuses (which seem to be more random) that bring a bit of luck into play, but the general rule of thumb is that you will defeat a fish if your stats are better.

Also, neighbors count towards your fish strength, so you might wish to add some more FishVille neighbors here to make sure you’ll be the best. Here are some screenshots with various aspects of the battle arena in FishVille: 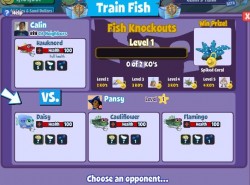 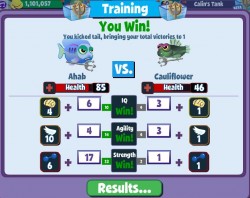 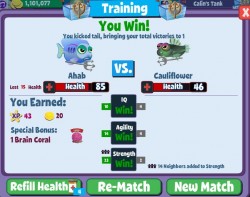