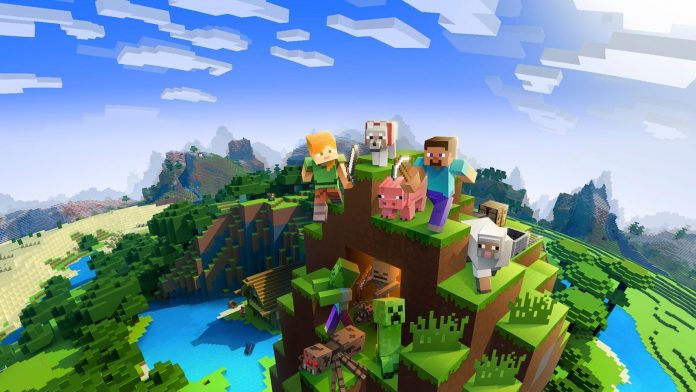 Minecraft is a cultural phenomenon. Long before Facebook proclaimed festively that it would be rebranding to “Meta” to build the metaverse of the future, Minecraft was already here providing us with the building blocks of the future.  Minecraft is a simple game that is bound to even simpler laws. You use pixeled cubes to build a world around you. While this may sound pretty basic for the 21st century, a time when photorealistic graphics dominate the narrative of video gaming, you ought to consider how much depth Minecraft has.

If visuals are your problem, you should probably consider the mind-blowing recreation of Middle Earth in Minecraft which took a staggering 10 years to finish. That is right, you can recreate an entire world in Minecraft, providing you have the time on your hands, and enough dedicated people to help you out.  Perhaps the best way to describe Minecraft is a giant virtual Lego and this would be accurate. After all, Minecraft does provide you with building blocks that then direct you to create new and exciting creative projects. Then again, Minecraft is really not about gaming or building worlds, it’s about life and the universe as a whole.

The Social Experience in Minecraft – More Than a Game

Minecraft is an incredibly potent game. It has a social element that you can compare to the atmosphere in social casinos where everyone is gaming and is further motivated by the fact that there are more players to be seen around. Well, Minecraft is something like that.  As it turns out, the game has been used by international journalists to create a library in Minecraft that would become a safe haven for online users who wanted to share and obtain information on illegal government operations without risking repercussions.  Remember when the FBI infiltrated World of Warcraft? Well, that is similar, but only more important and powerful. Minecraft has become the perfect place to not just play a game, but create gaming worlds and recreate experiences in a way that you enjoy and want to experience again and again.

Not only that, but Minecraft is a place to learn and pick new schools. Why go to Udemy when you can do that directly into a Minecraft French classroom? There are many reasons why the game has become so popular, but its universality as a building block of everything familiar to human experience is definitely the most important.  You can use Minecraft as a game, where you can learn, exchange sensitive information, or help out fellow humans. Players in Minecraft are not just random and mindless gamers.

They are authors and creators of universes far more compelling than anything we can imagine. In fact, players’ imagination is the limit and with this in mind – it seems Minecraft’s potential is boundless as is humans’ ability to invent and dream up worlds. Minecraft has also spanned a variety of modes that exemplify this aspiration to create original work within the game world.

How Has Minecraft Changed the World Today?

There are many ways in which Minecraft has altered what we know about gaming. Fortnite, a game that is one of the biggest blockbusters was loosely based on Minecraft, as the ability to create structures and alter the world in real-time was borrowed directly from the game.  Players will find themselves quite happy to explore Minecraft for what it is today. There are several important aspects of the game that will make it a compelling experience for everyone:

There are many reasons why the world is a better place thanks to Minecraft. From aiding creative journalism to allowing individuals to learn for free, Minecraft has created a world of opportunity for people who are very keen to continue growing and developing.  Video gaming has proven to be an impactful social element because of the way it connects us and the opportunities it opens up. However, no other game exemplifies these trends quite the same way as Minecraft.  Even if you are new to Minecraft, you will quickly realize that the game has been built with the idea of empowering the individual.

Simple as the premise is, there is a level of depth that only your imagination and creativity can put a limit to in the world of Minecraft.