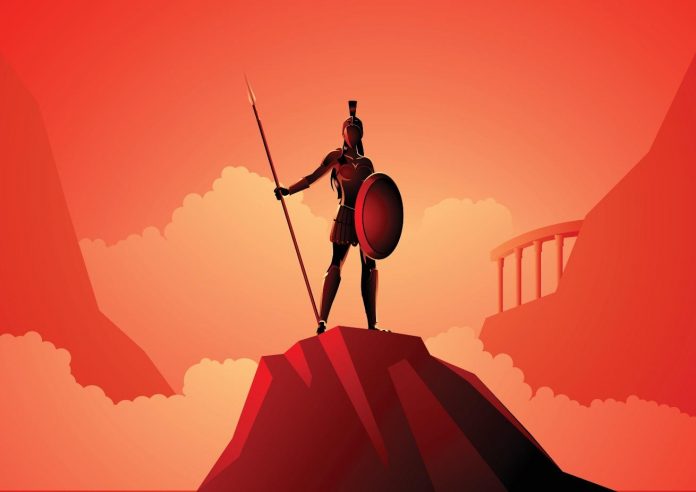 Greek mythology has long been a popular theme of slot games. But, with so many god-themed games out there, it can be hard to know where to start. We’ve put together a short list of some of the games in which your favourite gods rule the reels, so they can battle it out to see who is the mightiest in all of Olympus.

Read on to find out more.

Up high in the stormy sky, you’ll find the five deep red reels, four rows and 30 paylines. The game is framed within carved pillars, with three wheels perched on top. There are bonus features, and an array of symbols such as a vase, a laurel wreath, a lightning bolt, a lion, an eagle, and of course Zeus himself. The game’s wild can appear on reels two, three and four, and automatically doubles any wins when it completes a winning line.

You can also trigger additional features in this game, like the in-game jackpots. Here, there are five prize levels; mini, minor, major, mega and grand. The grand jackpot is the most lucrative and can pay out 100,000x your bet.

In addition to this, there’s the Wheel Feature, which can be accessed with the minimum Bonus Bet. By landing three or more background symbols in a direct line on a single row, you could win the Wild Zeus Spin bonus feature. Here, up to 12 wilds will be placed on reels two, three and four, and you could bag yourself respins and even more chances to gain more great prizes!

To see for yourself, you can play here, or keep reading to see if the likes of Apollo or Athena will live up to the might of the God of Thunder.

Set against a backdrop of Ancient Greece, you’ll find this mystical game with 20 paylines, a selection of playing card symbols, and the Ruler of the Sun himself. Other symbols in this slot include a vase, harp, chariot and horse, as well as wild and other bonus symbols. The wild symbol shines brightly as Apollo takes to the stage, substituting all other symbols, except the Bonus and Amazing symbols, to help you form winning combinations.

The Amazing symbol is the first of the three standout bonus features in this heavenly game. Six or more of these symbols, represented by bright golden suns, will trigger the Amazing Link feature, where three respins are awarded.

In addition, there’s a Free Spins feature, which is triggered when three Bonus symbols land on the reels. Here, you can choose the number of Free Spins and Amazing Reels to play. Any additional Bonus symbols that land during free spins will grant you an extra spin as well as an upgrade of the reel.

There’s also a Pick feature, which can be triggered randomly by amazing symbols. All you have to do is match three icons to win either the mini, minor, major or mega prize, awarding up to 5000x your total bet!

The goddess of wisdom and war is ready to battle it out to see if she will rule the reels of Olympus in this slot, with impressive graphics, five reels and 10 paylines, you’ll be able to enter the golden gates for a front-row seat with just 0.20 coins. As you play, you’ll be transported into an ancient Greek temple, with huge columns on display either side of your screen.

Symbols during gameplay include the common playing card icons, but the more lucrative symbols include a silver horn, a Greek urn, a golden lute and even Athena’s golden helmet can be found on the reels. The helmet is one of the highest paying symbols, worth up to 2,000x your stake.

There’s a wild symbol that can triple any winning combinations it’s involved in, and a Battle Spins feature, which is triggered when three scatter symbols land on the reels. The scatter symbol is represented by the double swords and a shield, and this can award you with 12 free spins. What’s more, any time scatters appear on the reels, you’ll gain an extra three Battle Spins on top of your remaining total!

There are so many ways to unleash the power of the ancient gods, so who do you think will rule the reels of Olympus?
Gambling can be addictive, please play responsibly.
Click HERE for more info.